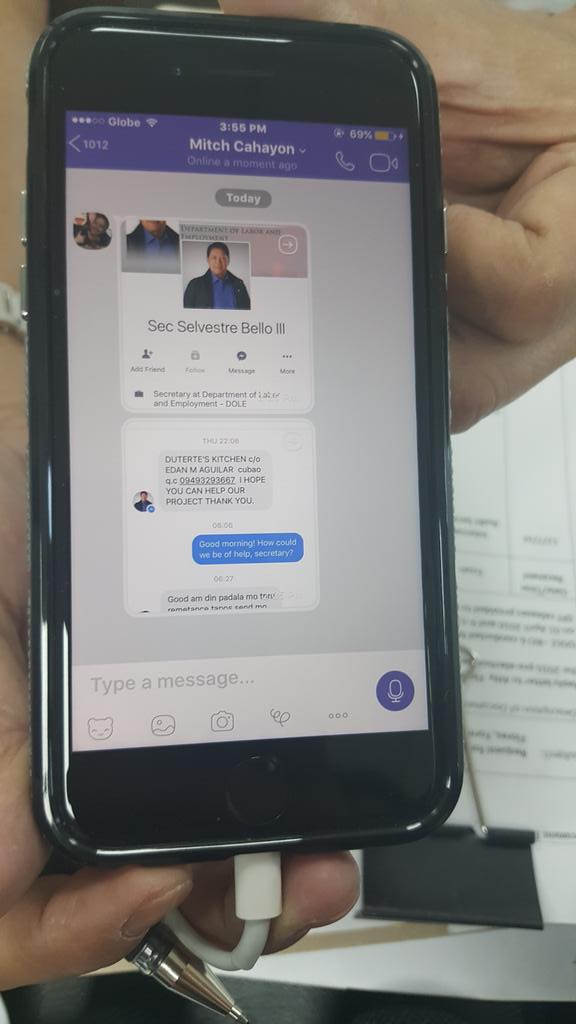 Labor Secretary Silvestre Bello III has warned the public against scammers using his name to solicit money from unsuspecting individuals, supposedly for the benefit of overseas Filipino workers.

In a hastily-called press conference on Friday, Bello advised Filipinos to be more wary of personalities posing as him, especially those asking money.

Bello revealed that he learned of the scam using his name to solicit cash from a supposed victim, who claimed to have been duped into depositing P200,000 into a bank account that was not his.

The Department of Labor and Employment Secretary said the victim, reportedly the brother of a lawmaker, alleged that a man sounding like Bello called him up.

“Someone supposedly called him up and asked for help, asking for donations for OFWs. The caller sounded like me supposedly and so the deposit was made,” Bello said.

The DOLE chief also showed reporters a Facebook profile with the name, “Sec Selvestre Bello III,” posing as him.

The owner of the account reportedly sent messages to would-be victims, asking for donations for a certain “Duterte’s Kitchen.”

The owner of the account asked for money to be sent through remittance or money transfer.

Bello said he had a Facebook account but he does not personally handle it as he does not know how to use Facebook. He also denied that the “Sec Selvestre Bello III” account was his.

“The public should not believe and disregard any form of solicitation. We don’t solicit. It is prohibited by law and if there’s any, it’s not our agency,” Bello said.

He added: “I am very worried about this because my name is being used.”

Bello also expressed concern that his Viber account might have been hacked as several messages which he did not compose were attributed to him.

“If you see any solicitation request supposedly from me on Facebook or Viber, please disregard it,” he stressed./rga