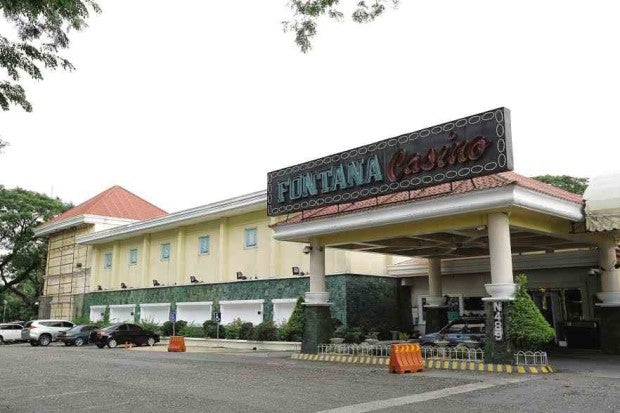 The Fontana Leisure Parks and Casino is empty after the government ordered its closure following the discovery of more than 1,300 Chinese working there without valid visas. —PHOTO COURTESY OF DENNIS MENESES/CDC

CLARK FREEPORT—About 2,000 workers and employees at the Fontana Leisure Parks and Casino here may lose their jobs after the state-owned Clark Development Corp. (CDC) suspended the certificate of registration and tax exemption of Fontana Development Corp., pending a Department of Justice (DOJ) investigation of Jack Lam’s online gaming operations at the resort.

The affected workers consist of 1,200 regular workers while the rest render manpower services or report for work on a per activity and on call basis, according to lawyer Ana Dione, Central Luzon director of the Department of Labor and Employment.

Dione has advised Fontana’s personnel department to give notices of temporary layoff to employees pending the DOJ probe.

Aside from his online gaming venture, Lam is being investigated for hiring Chinese nationals who do not have working visas or have been overstaying in the country.

The CDC also stands to lose around P79 million in annual lease revenue from the Fontana shutdown. Fontana paid P78.04 million in lease payment in 2015 and P74.62 million from January to Sept.16, according to the CDC.

A pending case at the Office of the Ombudsman may help the Bureau of Immigration (BI) determine if Chinese nationals employed by Next Games Outsourcing Inc. (NGOI) inside Fontana had working visas or were overstaying tourists.

The case alleged that the BI Angeles City office, during the term of its former head, Janice Christine Corres, processed 100 to 200 visa extensions weekly for Chinese guests and employees of NGOI through her husband who worked at Fontana, the source said in a Nov. 19, 2015 letter to former Immigration Commissioner Siegfred Mison.

Corres said the allegations were “untrue and without basis.”

Manuel Sequeira, former Fontana chief executive officer, said the firm’s transactions with BI were “all above board” and that Corres’ husband, described to be an employee of Fontana’s owner, Jimei International, for 16 years as airport and VIP services manager, was authorized to facilitate the applications for visa extensions of casino high-rollers and those hired by NGOI.

The BI personnel told Mison that visa extensions were approved “without the personal appearances of the foreign applicants and oftentimes with insufficient documentary requirements attached to their application forms.”

“This is a clear violation of the immigration law that states that only authorized BI personnel should take fingerprints from foreign applicants,” they said.

Corres said no irregularities could be committed because the BI field office used a “step-by-step process system where transactions were logged at every point.”

“Everything is transparent and cannot be edited,” she added.

By then Sequeira said NGOI employed 500 to 600 workers.