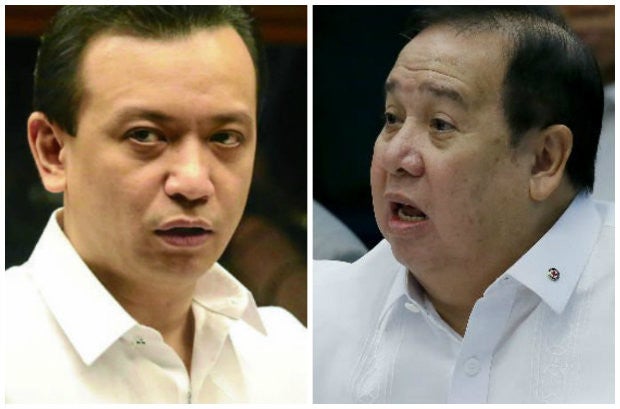 Sen. Antonio Trillanes IV on Wednesday called Sen. Richard Gordon a “lackey”’ of President Duterte as he slammed as “a piece of garbage” and a “cover-up” the latter’s committee report on extrajudicial killings in the government’s ongoing war on illegal drugs.

Trillanes was furious with the findings and recommendations contained in the committee report that Gordon released following the hearings conducted by the Senate justice committee on allegations of extrajudicial killings.

Gordon said on Tuesday that his committee did not find any proof of extrajudicial killings in the ongoing police operations against drug suspects, as well as proof of the existence of a Davao Death Squad allegedly formed by President Duterte to target criminals when he was mayor of Davao City.

He recommended the prosecution for murder and perjury of confessed hit man Edgar Matobato, who had testified that he killed a Pakistani terrorist on orders allegedly by the Davao Death Squad (DDS).

“behaving badly”’ during the hearings.

He cited De Lima for “material concealment” when she allegedly did not disclose to senators  that Matobato already had a pending case for the kidnapping of Sali Makdum in 2002 when Matobato had disclosed the DDS order to kill the terrorist.

On the other hand, Trillanes was cited for allowing Matobato to leave the Senate premises when senators wanted to confront him over his pending kidnapping case on Makdum.

“Sen. Gordon only showed that he was a Duterte collaborator and whose purpose is to cover up the misdeeds of his political master,” Trillanes told reporters.

He said he even presented video footage of a man who was taken by policemen in Cavite province and ended up dead but that Gordon ended immediately the Senate hearings.

“So how about the 6,000 who have died in the past five months? Who is responsible for their deaths?” Trillanes said, referring to the number of deaths of drug suspects who were either killed in police operations or killed by unidentified assailants.

The senator criticized Gordon for his “twisted logic”’ because while the latter believed Matobato’s testimony of killing Makdum in 2002, he would not do so on the hitman’s testimony that the President was the mastermind of the DDS.

Trillanes said he had not yet gotten a copy of Gordon’s committee report. De Lima told reporters she has written the office of Gordon to get a copy of his report.

Told that copies of the report were passed to senators in a caucus on Tuesday, De Lima said she was not aware there was a caucus. “That is not good. Why are they treating me in that manner?” she said.

She asked whether it was deliberate that the  committee was also not giving her a copy, which she needed in coming out with a dissenting report.