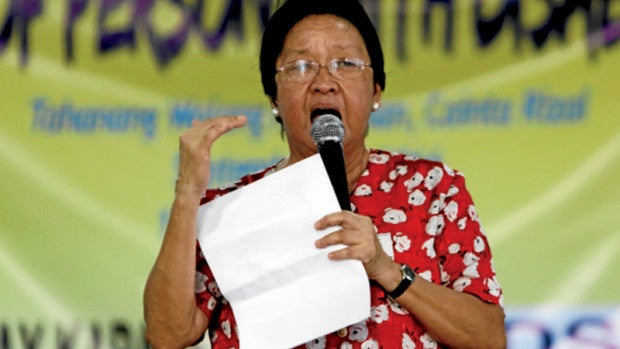 Social Welfare Secretary Judy Taguiwalo on Thursday signed the implementing rules and regulations (IRR) of Republic Act 10754 or An Act Expanding the Benefits and Privileges of Persons with Disability (PWDs).

In her speech during the ceremonial signing the IRR at the Department of Social Welfare and Development (DSWD) headquarters, Taguiwalo also urged Congress to allocate a bigger budget for the department’s advocacy for PWDs.
“This is an early Christmas gift we can give to our persons with disability,” Taguiwalo said.

READ: IRR for PWD VAT exemption out on Thursday

Taguiwalo said the law is “reflective of the rights of PWDs to be recognized and upheld as a means to promote equality.”

“It is not a question of charity,” Taguiwalo said.

Former Leyte Rep. Martin Romualdez, who lost his senatorial bid in the May elections, graced the event as the primary author of the law.

“The fight has just begun. Our task now is to ensure and guarantee that all beneficiaries will fully enjoy the assistance that the law has been offering,” Romualdez said.

Romualdez’s bill that became a law amended Republic Act 7277, or the “Magna Carta for Persons with Disability,” which already grants a 20-percent discount to PWDs.

Romualdez’s bill that became a law amended Republic Act 7277, or the “Magna Carta for Persons with Disability,” thus exempting PWDs from the value added tax.
“From the bottom of my heart, I thank Sec. Taguiwalo, other government officials and stakeholders for finishing the IRR of this very important law. This is a compassionate measure aimed at helping
the plight of the PWD sector,” Romualdez said.

Senator Juan Edgardo “Sonny” Angara, who chairs the Senate ways and means committee, said he would not let the VAT exemption for PWDs be removed in the Department of Finance tax package that seeks to lower income tax but imposes offsetting measures, such as removing VAT exemption of elderly and PWDs.

“Tututulan natin yan. Yan ang sector na nangangailangan ng tulong (We will oppose it. This is the sector which needs help),” Angara said.

Taguiwalo said talks are ongoing to persuade Finance Secretary Carlo “Sonny” Dominguez to reconsider removing the VAT exemption for PWDs and the elderly.

Under the law, PWDs are exempted from the 12-percent VAT on land transportation, domestic air and sea travels; on fees and charges for medical and dental services including diagnostic and laboratory fees, and professional fees of attending doctors in all government facilities as well as in all private hospitals and medical facilities; on cost of medicines; on funeral and burial services; on fees and charges in hotels, restaurants and recreation centers; and, on admission fees in theatres, cinema houses, concert halls, and other similar places of culture, leisure and amusement.
The VAT exemption is on top of the 20-percent discount on certain goods and services that PWDs are already entitled to under the current Magna Carta for Disabled Persons.

The new law also grants a P25,000 annual income tax deduction to relatives, within the fourth civil degree of consanguinity or affinity, who are taking care of PWDs.

The new law would take effect 15 days after the IRR is published in a national newspaper of general circulation. RAM/rga