Wounded soldiers insist they were attacked in Marawi City 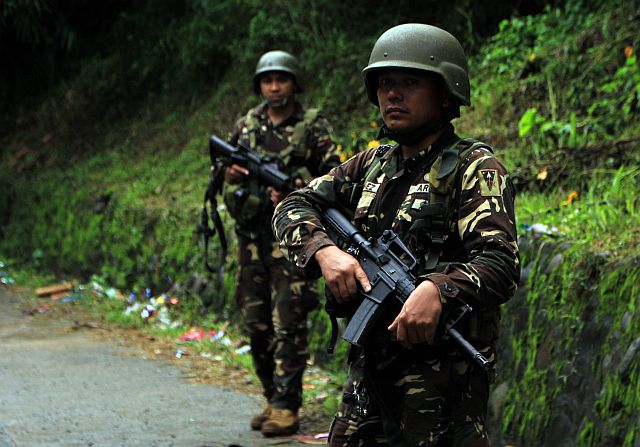 Soldiers patrol parts of Marawi City, on Nov. 29, 2016, following an attack on a convoy of the Presidential Security Guard that served as an advance team of President Duterte, who visited on Nov. 30, 2016. (INQUIRER FILE PHOTO)

CAGAYAN DE ORO CITY – Amid claims by a group that Tuesday’s ambush of soldiers, including the President’s guards, in Marawi City, was staged, some of the soldiers who were injured insisted that they were attacked.

Drieza Lininding, vice chair of the Bangsamoro National Movement for Peace and Development, has claimed that the attack was not an ambush but an “accidental” firing of a weapon of a soldier in the convoy.

In his Facebook post on Wednesday, Lininding said they asked the residents living near the site about the attack and the residents told them no ambush took place in Barangay Matampay in Marawi.

Aboard the convoy were members of the Presidential Security Group (PSG) and the Malacañang communications team who served as President Duterte’s advance party.

The wounded soldiers insisted they were waylaid but investigators were still determining the group behind the attack, although government troops have been fighting the Maute group in Butig, Lanao del Sur.

Corporal Vincent Paniza, one of the PSG members who were wounded, confirmed it was an ambush and that it happened fast.

“It was so sudden. Something exploded behind us, we don’t know what it was,” he said.

Paniza heard gunshots but already wounded, he could not fire back.

Gonzales said he was in the lead vehicle and when it negotiated the steep part of the road, they heard something go off.

“There was an explosion on the side of the road, and after that, they (armed men) fired at us. We returned fire,” he said.

Gonzales said the soldier beside him was also wounded but they didn’t see who shot them.

He confirmed that an improvised explosive device (IED) exploded.

Duterte visited the wounded soldiers and the PSG team confined at the Philippine Army’s 4th Infantry Division hospital and at a private medical facility here on Wednesday, and pinned on them Wounded Personnel medals.

Capt. Joe Patrick Martinez, spokesperson of the 4th ID, said they welcomed the President’s visit as it boosted the morale of the wounded soldiers and the entire division’s troops.  SFM/rga