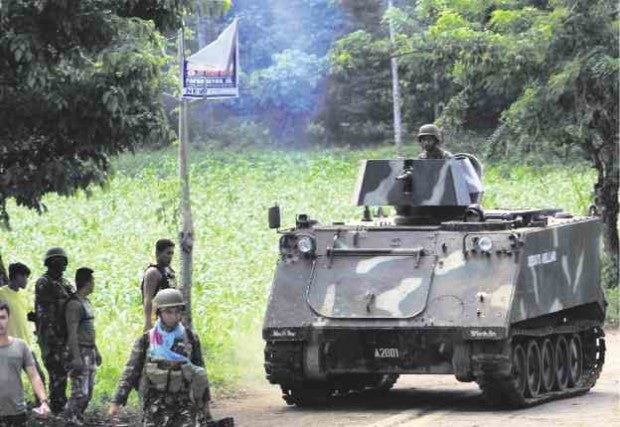 Soldiers have fully taken control of Butig, Lanao del Sur, which was seized by members of the Maute group since last week, the military said Thursday.

“The center of Butig has been 100 percent cleared by our troops. The main areas, the built-up areas of Butig municipality, is now clear,” Armed Forces spokesperson Brig. Gen. Restituto Padilla told reporters at Camp Aguinaldo.

Government troops are preparing to turn over the town to the local government so the residents can start going back to their homes.

“Military operations will continue in nearby areas where clearing operations are needed so the rebels won’t be able to return,” Padilla said.

The spokesperson also assured that there are security measures in place in order to secure the safety of the residents.

Military estimates said that 61 members of the Maute group were killed, while 12 were injured. On the government side, wounded soldiers remained at 35.

The Maute group, which has pledged loyalty to the Islamic State, previously took control of Butig town since last week, prompting the military to launch its operations. JE

Butig evacuees can’t get relief aid due to clashes

Read Next
IRR of PWD law inked
EDITORS' PICK
vivo brings to the Philippines a powerful smartphone with a slimmer body, the vivo Y02s for only PHP 6,499
Palace: Biggest supermarkets in PH commit to sell sugar at P70 per kilo
What to watch out for when selecting a video surveillance solution
Heads may roll at BOC, says Palace if sugar smugglers are allowed to use recycled import permits
House energy committee chair Arroyo bats for cheap electricity
DOH reports increase in daily COVID-19 deaths, mostly unvaxxed
MOST READ
Brian Poe-Llamanzares receives his PhD in Public Administration
Metro Manila’s No. 1 wanted man arrested, says NCRPO
Alyssa Valdez to miss Creamline’s AVC Cup campaign
DepEd to give teachers P5K cash allowance within first week of classes
Don't miss out on the latest news and information.