Lawmakers raise impact of proposed salt tax on the poor 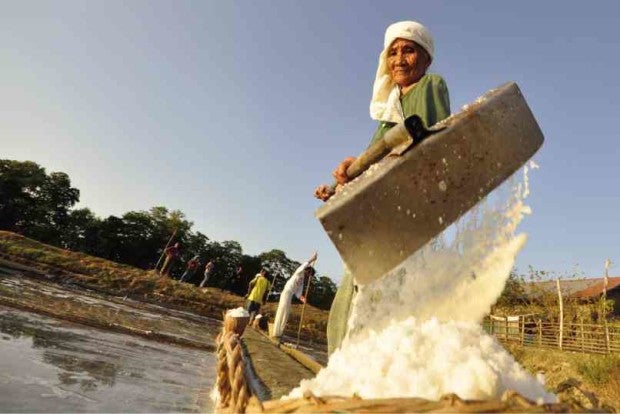 An old woman working in a salt farm in Dasol, Pangasinan province, takes advantage of the intense heat to harvest salt from seawater in several hectares of beds. WILLIE LOMIBAO / INQUIRER NORTHERN LUZON

MANILA — Lawmakers of the House of Representatives have raised concern over the proposed taxation of “excess” salt in processed foods on the poor.

House Bill No. 3719, authored by Masbate 3rd District Rep. Scott Davies Lanete, seeks to impose a tax of P1 for “every milligram of sodium in excess of one-third of the allowable daily intake of sodium chloride” prescribed by the Department of Health.  In his explanatory note, Lanete called salt a “silent killer” that has led to many cases of higher blood pressure.

During the ways and means committee’s Monday hearing, Batangas 4th District Rep. Lianda Bolilia said that the poor would be affected the most, since they tended to consume salt-laden foods, such as inexpensive junk food, canned food or processed food.

Through her own computation, Bolilia found that the tax might be expensive. Going by the recommended daily intake of 2,000 milligrams, one-third of that threshold would be 666 mg.

Since a package of instant noodles—a staple meal for poor households—contains 1,200 mg of sodium, imposing a one-peso tax on every excess milligram would amount to a P534 tax, she said.

Bukidnon 3rd District Rep. Manuel Zubiri, meanwhile, said that “salt is not the enemy,” and the content of salt in each food item should be regulated instead of imposing a tax.

Kabayan Party-list Rep. Harry Roque also noted that the committee did not invite the poor people who have been eating salt for sustenance, referred to by a Tagalog idiom as “nagdidildil ng asin.”

“I cannot imagine na dadagdagan ang buwis sa asin. Karamihan ng mahihirap, ‘yan na lang ang kinakain (I cannot imagine increasing the tax on salt. Most of the poor only have that to eat),” Roque said, before chiding the officials of the Department of Finance and the Bureau of Internal Revenue for wanting to raise more money without the government improving on its ability to spend its budget on public projects.  SFM