19 heroes to be honored at Bantayog | Inquirer News

19 heroes to be honored at Bantayog 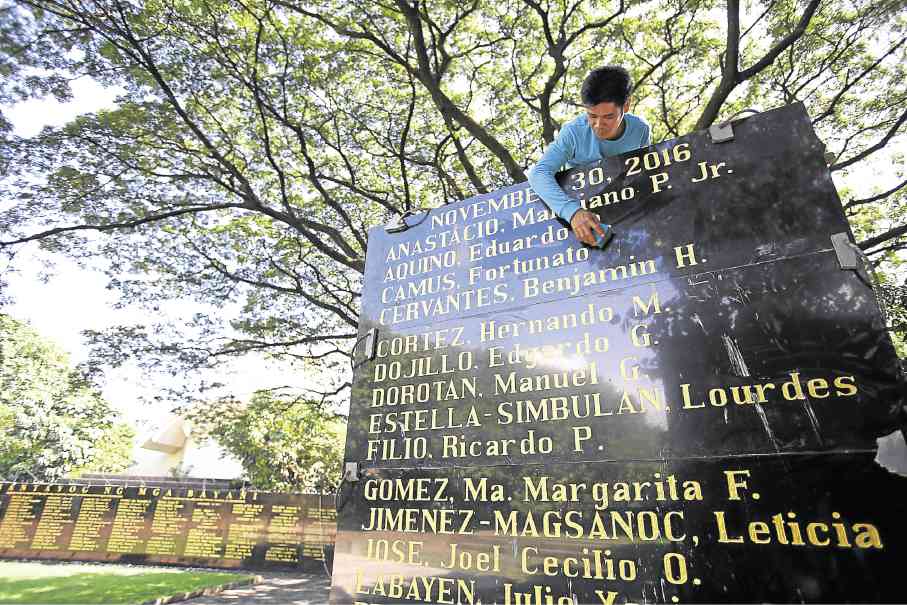 REAL HEROES The names of 19 people who fought the Marcos dictatorship have been engraved on the Wall of Remembrance at Bantayog ng mga Bayani in Quezon City. They will be honored in solemn ceremonies tomorrow, Bonifacio Day. The names include those of the late Inquirer editor in chief Letty Jimenez-Magsanoc and former Sen. Jovito Salonga. —NIÑO JESUS ORBETA

Three journalists led by the late Inquirer editor in chief, Letty Jimenez-Magsanoc, are among 19 honorees whose names will be added to the roster of heroes on Bantayog ng mga Bayani in Quezon City during solemn ceremonies on Wednesday.

The event will also coincide with the celebration of the 30th anniversary of the Bantayog ng mga Bayani Foundation, which was founded in 1986 shortly after the Edsa People Power Revolution that toppled the dictator Ferdinand Marcos.

All seven honorees, except one, were killed in their prime during the martial law years that lasted from 1972 to 1986.

Details about the lives and heroic sacrifices of each of the honorees may be found on www.bantayog.org.

Magsanoc was editor in chief of the Philippine Daily Inquirer from 1990 to 2015. She was the editor of Panorama magazine from the late 1970s to 1980, when the articles she published and her own writings displeased the powers-that-be.

She used the written word to challenge the Marcos dictatorship. Her forced resignation sparked indignation in the media sector.

After the assassination of former Sen. Benigno Aquino Jr. in 1983, Magsanoc edited Mr & Ms Special Edition that exposed the excesses of the Marcos regime. She was among those who attended the birth of the Inquirer in 1985.

A multiawarded journalist, Magsanoc died of natural causes on Dec. 24, 2015. After her death, then President Benigno Aquino III conferred on her the People Power Award. The Philippine Senate passed a resolution citing her contribution to the restoration of press freedom.

Bantayog cites Magsanoc “for speaking truth to power” and “for testing the limits of press freedom as writer and editor.”

The citation for Magsanoc on the Bantayog ng mga Bayani reads:

“For unleashing the power of the written word for the common good, for justice, freedom and democracy;

For challenging and exposing the excesses of the Marcos dictatorship through the media even at great personal risk;

For testing the limits of press freedom as writer and editor, for defying media restrictions and censorship under martial rule and for facing up to the wrath of the dictatorship;

For encouraging and giving space to bold and daring writers despite threats from the powers-that-be;

For the warmth, kindness and understanding she showed those who were victims of tyranny;

For keeping the vigil lamps lighted in the media so that freedom won may never again be taken away;

And for speaking truth to power without fear, for her faith in her fellow Filipinos, for placing above herself, God, family and country.”

Salonga, a lawyer, former senator and prolific writer, was known for his uncompromising stance against martial rule.

In 1980 he was arrested, detained and charged with subversion. Upon his release, the Salonga family lived in exile in the United States until freedom was restored in 1986.

Labayen was a “voice in the wilderness” when many in the Catholic Church hierarchy had yet to find their voices during the dark days of martial rule.

He immersed himself among the poor of his prelature, espoused social justice and gave voice to the oppressed. He risked the ire of the dictatorship.

Cervantes, an outspoken critic of the Marcos dictatorship, used theater and film as an agent for change and to raise people’s political awareness.

He was on the front line of street rallies against the dictatorship. He was detained three times—in 1975, 1977 and 1985.

Zumel was a newspaperman. When martial law was declared, he went underground and joined the leftist underground movement and spent many years in remote and difficult places where he continued to write and fight the dictatorship. 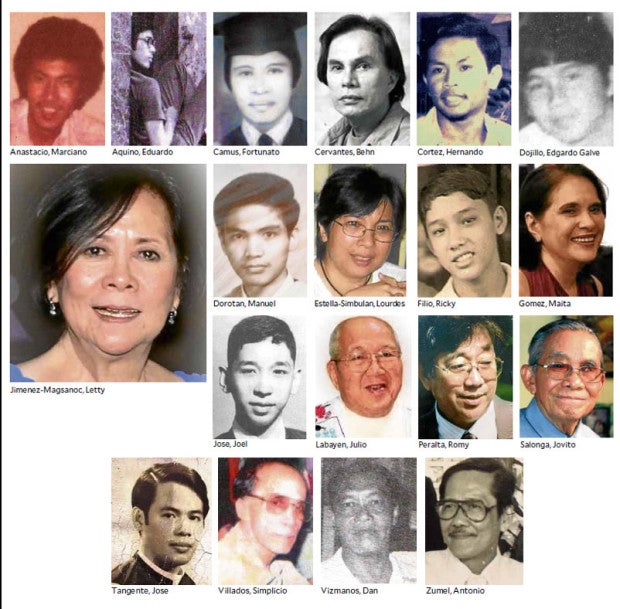 After the overthrow of the Marcos dictatorship, Zumel represented the communist-led National Democratic Front in peace talks with the administration of President Corazon C. Aquino in 1986. When the talks failed, he sought political asylum in The Netherlands, where he died in 2001.

The 19 2016 honorees bring to 287 the names engraved on The Wall, which stands just meters away from the 13.5-meter bronze monument created by renowned sculptor Eduardo Castrillo. The monument depicts a defiant mother holding a fallen son.

The monument, the commemorative wall and other structures at Bantayog Memorial Center are dedicated to the nation’s modern-day martyrs and heroes who fought against all odds to help restore freedom, peace, justice, truth and democracy in the Philippines.

Through its Never Again Never Forget Project, Bantayog addresses “attempts by certain groups to rewrite Philippine history, to confuse the young generation about the truths of the Marcos dictatorship, to erase its horrors, abuses and deceptions and to have it remembered as a ‘golden era’ in the Philippines.”

The Bantayog complex now includes a building that houses a small auditorium, library, archives and a museum. Its 1.5-hectare property on Quezon Avenue and Edsa was donated by the administration of President Corazon Aquino, through Land Bank of the Philippines, in 1986.

Every year, names are added to the Wall of Remembrance. The first 65 names were engraved on the wall in 1992.

The Bantayog ng mga Bayani Foundation is chaired by Alfonso T. Yuchengco. Salonga served as chair emeritus before he died. May Rodriguez is the executive director.

The ceremonies on Wednesday will begin at 4 p.m. The public is invited.