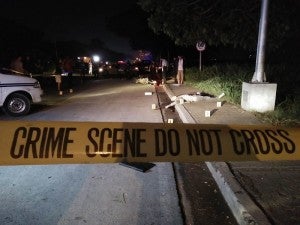 MANILA — A store owner, who once had a live-in partner included in the Pasay City drugs watch list, was shot dead on Saturday.

Police investigation showed that Bolboder was manning his store at the corner of FB Harrison and M. Acosta Streets when four motorcycle-riding gunmen shot him around 1:45 a.m.

The victim’s former live-in partner, Claire Maricris Galang, was previously arrested for illegal drug charges and is currently out on bail, according to SPO1 Melvin Garcia.

Also in Pasay City, a barangay tanod (village watchman) was gunned down Saturday about 8:30 p.m.

Police said Harry Parsaligan, 27, resident of Russell Street, Barangay 76, was onboard a motorcycle when he was shot along FB Harrison Street in the same barangay.

Pedicab drivers brought Parsaligan to the San Juan de Dios Hospital but he was declared dead at 9:11 p.m.

Five casings from a .45-pistol, two slugs and a deformed bullet were recovered from the scene.

Investigators have yet to establish the motive for the killing.  SFM

Read Next
Woman killed in front of teen daughter in Tondo
EDITORS' PICK
Acer starts the year off strong with the Aspire Vero National Geographic Edition
Over 3 Million worth of prizes to be won at Smart Padala’s SENDali Manalo Promo!
COVID-19 cases in City of Manila are decreasing, says OCTA
DOH: Too early to say COVID-19 cases are declining
The best of bayside and city living at SMDC’s Sail Residences
Gov’t rolls out COVID-19 vaccination in select pharmacies on Jan. 20 to 21
MOST READ
Comelec junks petition to scrap Bongbong Marcos COC
In Batanes, octogenarian dies of COVID-19
Marcos Jr. visits Cebu, stands as ‘ninong’ to mayor’s son
When to get boosters after positive COVID test
Don't miss out on the latest news and information.