Woman killed in front of teen daughter in Tondo 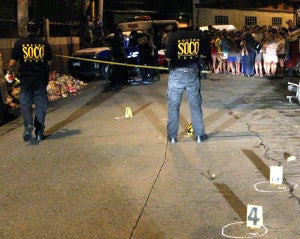 MANILA — A woman was shot dead in front of her 14-year-old daughter in Tondo, Manila. The motive has yet to be established.

On Saturday, SPO4 Glenzor Vallejo of the homicide unit identified the victim as simply Blessie. A gunman shot her in the head on the Friday night.

Beside Blessie was her 14-year-old daughter, who helped rushed the victim to the Mary Johnston Hospital where she was declared dead.

The gunman has not been identified as of Sunday. Witnesses described him as someone who could be in his late 30s and of medium build. He was wearing a yellow shirt, jacket and a pair of denim pants.

Before Blessie was shot, the gunman was seen passing by their house. Then, at 6:40 p.m., he pointed his gun at Blessie and fired.

He casually walked away from the site to ride a motorcycle driven by his accomplice, who was also unidentified as of Sunday.  SFM