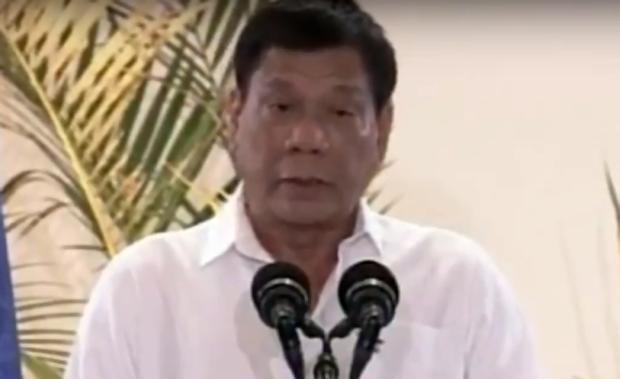 President Rodrigo Duterte —From a video by RTVM

MANILA — President Duterte has opted to smoke the peace pipe than order punitive military actions against the Abu Sayyaf Group and the ISIS-linked Maute Group, which had seized control of the municipal hall of Butig town, Lanao del Sur province.

The President issued his rather stunning remarks as the gripping images of the Maute Group members raising the black flag of the extremist ISIS at Butig municipal building came out in social media.

Duterte, however, clarified that simultaneous with the peace efforts of the Philippine government, the Armed Forces of the Philippines would work to prevent more attacks by the Abu Sayyaf and the ISIS-inspired Maute Group in Lanao del Sur.

“The ISIS is really dangerous. That is why you have to use your head. Do not drive them to despair because that is precisely what happened in Africa,” the President told the gathering of the San Beda College of Law Alumni Association in Taguig City last Saturday.

The tough-talking President apparently counted out military offensive as an option, saying such measure would only create more problems as the local terrorists would be “driven to desperation.”

“Instead of the groupings there, they are driven by Muslim nationalism or Moro for that matter. It’s Moro nationalism because they are really the owners of Mindanao long before the Spaniards came,” he said.

“That’s why you cannot finish (the war) because that place belongs to them. And what is the driving force? Nationalism of their land,” Mr. Duterte added.

The President, a former mayor of Davao City, had been giving contradicting statements on how his administration would deal with the Abu Sayyaf and other Muslim extremist groups, which he had lambasted for beheading their hostages.

He earlier hinted at talking with the Abu Sayyaf which, he said, were “not criminals,” but were only “driven to desperation” and “pushed to the wall” by the failure of the previous administrations in dealing with their problems.

The President later warned that he would “eat alive” members of the al-Qaeda-linked terror group if they refused to stop their kidnapping activities and bomb attacks in Mindanao.

Without elaborating, Mr. Duterte said he believed in the strategy of former President Fidel V. Ramos, a former chief of the now-defunct Philippine Constabulary, in dealing with the Moro “rebellion.”

“You cannot pass a fighting, a war or a country at war that is forsaken,” he added.

If he wanted to, the President said he could just send military helicopters to drop bombs in known Abu Sayyaf strongholds in Jolo province.

“You invade Jolo and the rest of the places there. Kill everyone with arms. (But) it will (only) worsen the situation, believe me,” he said.

Quoting Ramos, the President said “there can never be a real fight” in Mindanao.

“You just have to talk,” he said. “I was asked pointblank questions by the media in Zamboanga. They said, ‘Mr. President, this is the sixth time you visited the wounded and dead soldiers. When will you end the Abu Sayyaf?’ I said, ‘What do you want?’ I mean I could do it. I could burn Jolo now. I could bomb the place.”

“And in the mountains, I will order carpet bombings and I would tell the military after the operation, ‘I don’t want to see a single person standing.’ Do you want me to do that? And if I kill children and innocent people and all, can we survive as a nation?” he lamented. 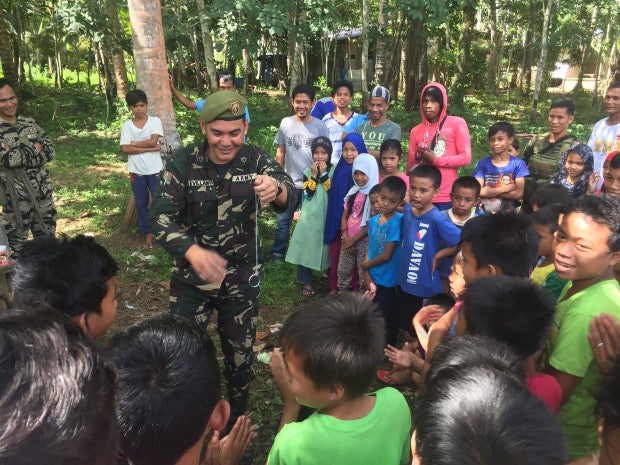 The military launched simultaneous medical and civic action missions in Basilan as a way of giving back to the communities. Some of the areas that received help are communities of the Moro National Liberation Front, which they consider a partner in fighting the Abu Sayyaf rather than a threat.

The Philippine government and the Armed Forces of the Philippines have been doing their best to prevent the Maute Group from attacking nearby municipalities in Lanao del Sur, Malacanang said.

“The Maute Group has long been professing allegiance to ISIS. So the reported raising of the ISIS flag does not come as a surprise. The Maute Group continues to court ISIS,” said Presidential Communications Secretary Martin Andanar in a statement.

“However, the Armed Forces of the Philippines will continue to frustrate the sinister objectives of the Maute Group and (the) government will prevent the situation from escalating to other areas,” he added.

Meanwhile, as the national government mulls initiating peace efforts with the “lawless armed groups” in Mindanao, the Armed Forces of the Philippines has been tasked to thwart the Maute Group in its attacks on nearby municipalities in Lanao del Sur.

“The Maute Group has long been professing allegiance to ISIS. So the reported raising of the ISIS flag does not come as a surprise. The Maute Group continues to court ISIS,” said Presidential Communications Secretary Martin Andanar in a statement.

“However, the Armed Forces of the Philippines will continue to frustrate the sinister objectives of the Maute Group and (the) government will prevent the situation from escalating to other areas,” he added.  SFM