Ombudsman: Probe goes on for Trillanes’ raps vs Duterte 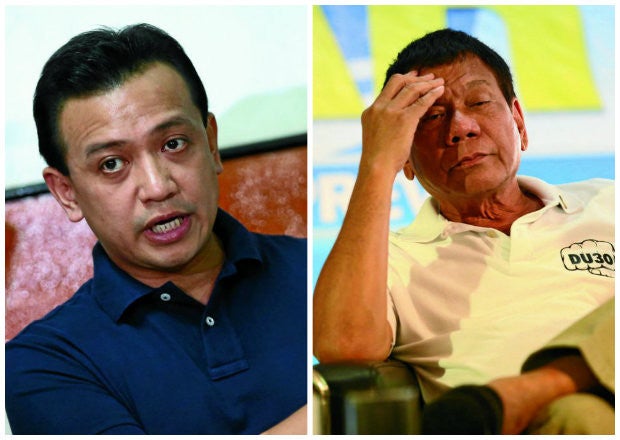 “As I said before, it is undergoing investigation,” Morales told reporters after she delivered a scathing speech against these “trying times” at the University of the Philippines College of Law alumni homecoming.

Trillanes had accused Duterte of hiring ghost employees at the Davao City Hall when he was mayor.

She pointed out that Trillanes’ complaints were filed before Duterte was elected president in May, citing it as a reason that an investigation can still be pursued even with his presidential immunity against suit.

“At the time the case was filed, he was not yet president,” Morales said. “See, under the law, even if a person has immunity or even if he’s impeachable, you still continue the investigation for purposes of determining whether there is misconduct.”

Morales raised the possibility that if investigators found liability on his part, “there could be a basis for impeachment, if it amounts to the grounds of impeachment under the Constitution.”

Yet, she stressed that she had already inhibited herself from the case, because of her relation to Duterte. Morales is the sister of Atty. Lucas Carpio, Jr., the husband of Court of Appeals Justice Agnes Reyes Carpio).

This makes her the aunt of Atty. Manases Carpio, the husband of Duterte’s daughter, Davao City Mayor Sara Duterte.

When asked about the possibility of Duterte being probed for the spate of extrajudicial killings that characterized his government’s bloody anti-narcotics campaign, Morales said she is not ruling it out: “Everything is possible.”

“We don’t discount any possibility that we’ll spare him or indict him. There are many possibilities,” she said.