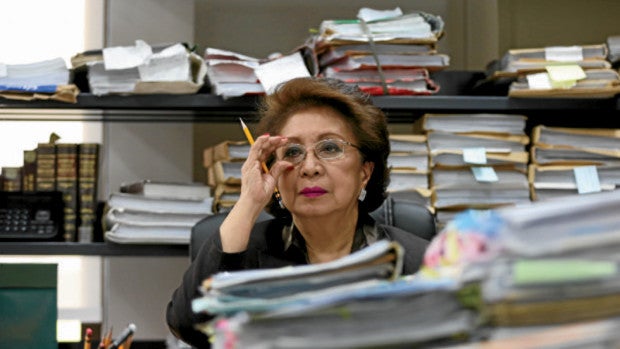 Between the hero’s burial for dictator Ferdinand Marcos and the seeming inability of leaders to tell right from wrong, Ombudsman Conchita Carpio Morales has described how people now live in “trying times.”

Morales on Friday night delivered a scathing speech that warned of how “great people fall as prey and transform as predators themselves.”

“Just because you can, does not mean you should,” Morales said in what seemed to be an allusion to the reasoning that Marcos’ burial is not prohibited by law.

“We cannot pretend to end impunity by clothing ourselves with impunity as well,” she told fellow alumni of the University of the Philippines College of Law during their annual homecoming.

Morales said that “the people should be bothered when the leaders themselves equally could not figure out what is right and wrong.”

In a thinly-veiled speech that stopped short of naming any incumbent leader, Morales stressed two all-important tenets of the “10 Commandments”: Thou shalt not steal, and thou shalt not kill.

“When leaders seem to send the message of promoting, rather than condemning, reprehensible acts that transgress basic human rights, the people ought to be concerned about it–rather than cheering for it either out of sheer ignorance, callous conscience, blind loyalty, or gorgonized fanaticism,” she said.

Recalling how Marcos’ regime has been polarizing even to the UP Law students of four decades ago, Morales exclaimed: “Indeed, these are interesting times we live in–again.”

The difference she observed is that “this generation has entered the so-called ‘post-truth’ era where truth does not really matter any more.”

Post-truth politics, she said, is marked by a big part of the public that would rather believe fake news sites and “echo the baseless assertions of dubious bloggers and flame baiters.”

She said that when the supposed “truths” about purported “progress” under martial law becomes more fact than fiction, “we see a transformation of our values as a people.”

“Now it is not only truth that has become elusive–even reason has escaped us,” she said.

Morales said that people “at this time and clime” need to confront one nagging question: “What have we become as a nation?”

She implored her colleagues in the legal profession: “We should not wait until the ‘sea of ethics’ runs dry, nor should we allow the navy captain to altogether dismantle the ‘lighthouse’ that gets in his way.” TVJ

Thousands turn up for anti-Marcos protest at Luneta amid rains