Kate Raca said she had never thought that chant, set up by her uncle and thousands of other University of the Philippines students as they marched against President Ferdinand Marcos in the 1970s, would also be the rallying cry of millennials like her in their fight against the revision of Philippine history to bring the late strongman’s family back to political power.

Decrying what they called the Duterte administration’s connivance with the Marcos family to clandestinely bury the remains of the strongman at Libingan ng mga Bayani last week, Raca and hundreds of UP students gathered on the steps of the university’s Palma Hall on Friday and chanted what they thought of the man who put the Philippines under martial law in 1972 and ruled the country with a mailed fist for the next two decades: “Marcos, Hitler, diktador (dictator), tuta (US lapdog)!”

“The chant was a call to action during the dictatorship. We never thought we would have to pick up the call. [Now we have, because] the Marcoses are creeping back to power, and have shown that they [are out to] revise our country’s history,” Raca said.

Her schoolmates Celya Gonzales and Regina Romero were there, too, denouncing the dictator’s burial at Libingan, which President Duterte allowed but opposed in the Supreme Court by seven groups of petitioners, including lawmakers who opposed Marcos’ martial rule and survivors of torture in the dictator’s military prisons.

The petitioners argued that an honorable burial for dictators was “illegal and contrary to law, public policy, morals and justice.”

They also cited Mr. Duterte’s political debt to the Marcos family, which supported his campaign for Malacañang.

On Nov. 8, however, the Supreme Court ruled in favor of Mr. Duterte, saying Marcos was never convicted by final judgment of any offense involving moral turpitude. It said the convictions cited by the anti-Marcos petitioners were civil in nature. 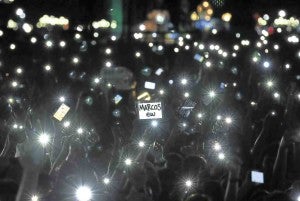 Yesterday’s placards and candles have been replaced by today’s tablets and smartphones as millennials take their gadgets to Rizal Park for last nights’s “Black Friday” anti-Marcos protests. PHOTO BY NIÑO JESUS ORBETA

While critics may disregard Marcos as President due to his human rights abuses, the court said he could not be denied the right to be acknowledged as a former legislator, defense secretary, soldier, war veteran and a Medal of Valor awardee.

“While he was not all good,” the 15-member court said, “he was not pure evil either.”

The court gave the petitioners 15 days to appeal the decision.

With only 10 days gone, however, the Marcos family, with help from the military and the police, transferred the dictator’s preserved body from a mausoleum in Batac, Ilocos Norte province, to the heroes’ cemetery in Taguig City and buried it there with military honors in secrecy-shrouded rites on Nov. 18.

The Marcos family’s stealthy move angered the petitioners —who vowed to press for a reversal of the decision—other opponents of martial law, and students across the country.

A week later, thousands of Filipinos marched in cities across the country to protest the dictator’s burial among heroes.

About 15,000 activists turned out in a main rally dubbed “Black Friday” protest despite rainy weather at Rizal Park in Manila, where they carried Marcos’ effigy in a mock coffin.

Former Rep. Neri Colmenares, one of the petitioners in the Supreme Court challenge, spoke at the gathering, denouncing the plunder of the national coffers during Marcos’ rule that impoverished the nation.

He said the protest was not only against the burial of Marcos at Libingan, but also against the return of the Marcoses to political power.

Former Rep. Bonifacio Ilagan, also at the rally, said the burial of Marcos at Libingan implied “revisionism and acceptance of strongman rule.”

The group Promotion of Church People’s Response also pushed against the political rehabilitation of the Marcoses.

“We must not forget. Left unchecked, the Marcoses will continue to manipulate their inherited ill-gotten wealth and power toward reinvention and resurgence,” the group said in a statement.

In nearby Laguna province, educators, students and employees of the University of the Philippines Los Baños marched to support the main rally in Manila.

Up north and in Central Luzon, despite the rain, hundreds of protesters marched in the cities of Tuguegarao, Cabanatuan, Baguio and Angeles.

In the Visayas, protesters denounced the burial of Marcos in the cities of Tacloban, Cebu, Bacolod, Iloilo, Roxas and Kalibo.

In Iloilo City, students marched to protest not only the burial of Marcos at Libingan, but also against the return of the Marcoses to Malacañang.

Rallies were also held across Mindanao, but stormy weather limited participation to just hundreds in the cities of Davao, Cagayan de Oro and Zamboanga.

The protests were partly directed at Mr. Duterte, who again insisted that his decision to allowing the burial of Marcos at Libingan was legal.

Mr. Duterte blamed the controversy on his predecessors, who he said did not revise the law to keep Marcos out of the heroes’ cemetery.