Duterte explains Marcos burial: He was a president and a soldier | Inquirer News
Close
menu
search

Duterte explains Marcos burial: He was a president and a soldier 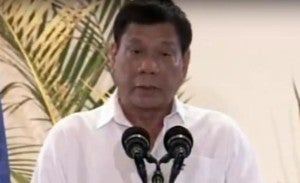 President Rodrigo Duterte delivers a speech shortly after his arrival at the Davao City International Airport on Wednesday, Nov. 24, 2016. —From a video by RTVM

The groups protesting the burial of former President Ferdinand Marcos at the Libingan ng mga Bayani should consider two things: Was Marcos a president? Was he a soldier?”

President Rodrigo Duterte raised those questions on Wednesday during his speech on his arrival Wednesday night at the Davao City International Airport from his trip to Peru and New Zealand.

“I will gladly and be happy even to step down and relinquish my post if you can answer in the negative,” Duterte said. “Was the late Ferdinand Marcos a president? And was he a soldier?”

“Never mind about a hero,” he added, dismissing claims that Marcos was made a hero by his burial at the Libingan ng mga Bayani, which houses the graves of former presidents and soldiers.

The burial, which was described by Marcos opponents as “sneaky” and “clandestine,” pushed through on November 18. The public did not know of the plan and was only informed about it a couple of hours before the actual event.

In Peru, Duterte attended the APEC Economic Leaders’ Meeting on Nov. 19 and 20. In New Zealand, he made a brief stopover on Nov. 22 in Auckland to meet with Foreign Minister Murray McCully and the Filipino community there. /atm