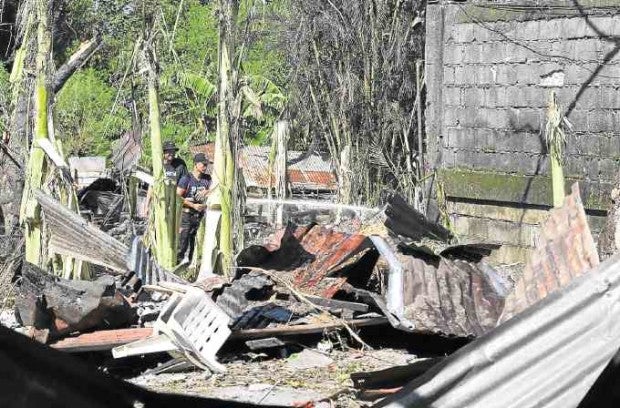 DEADLY BANG Policemen and firemen inspect the extent of damage to a firecracker manufacturing area in Sta. Maria town in Bulacan province after an explosion on Wednesday. —JOAN BONDOC

STA. MARIA, BULACAN—The campaign for a national firecracker ban has grown louder following the death of two children in another firecracker factory explosion here on Wednesday.

Brylee Mayo, 5, and his sister, Ashley, 2, were killed in the explosion at a factory at Sitio Bangka-bangkaan in Barangay Pulong Buhangin here at 9:15 a.m. Seven factory workers were injured.

Supt. Ranier Valones, Sta. Maria police chief, said investigators have yet to determine the cause of the blast. The provincial government also wants to know how and why children were in hazardous work places like a firecracker factory.

Valones said the factory makes “kuwitis” (skyrockets) and is owned by Wilfredo Alonzo, a licensed manufacturer.

On Oct. 12, an explosion triggered a fire that razed a row of firecracker stores in Bocaue town. Gina Gonzales, a firecracker dealer, and Manuel Ayala, a soft drink dealer, were killed and 24 others were hurt.

Investigations traced the blast to the improper storage of chemicals used in making firecrackers and other pyrotechnic products.

Bocaue is the province’s firecracker manufacturing and retail center, but most factories producing firecrackers and pyrotechnic products are located in this town.

Celso Cruz, president emeritus of the Philippine Pyrotechnic Manufacturers and Dealers Association Inc. (PPMDAI), said the latest accident should not be used as reason to impose a ban on the sale and use of firecrackers.

It would also not justify a repeal of Republic Act No. 7183, the law that regulates the manufacture, sale and distribution of firecrackers and pyrotechnic products in the country, he said.

“There were lapses in regulation and by the manufacturer [which led to the explosion] but it does not mean we should ban the industry completely,” he said. —CARMELA REYES-ESTROPE