Soon, 300 trees will be gone along Iloilo-Capiz road | Inquirer News

Soon, 300 trees will be gone along Iloilo-Capiz road 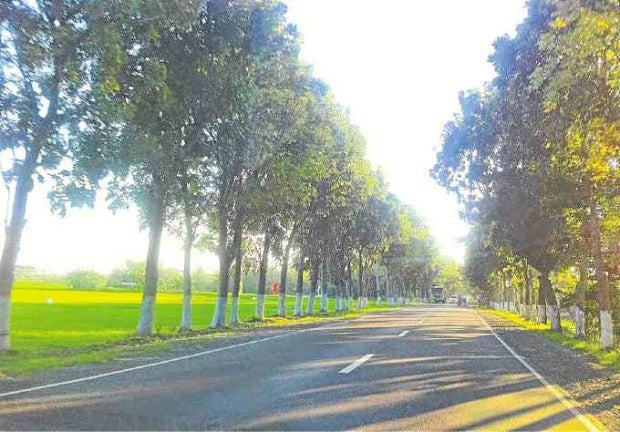 Trees give travelers a refreshing site along the national highway in Pototan town in Iloilo province but the
DPWH has started cutting them to give way to a road widening project. —PHOTOS FROM vincegregorii.blogspot.com and @Pototan Facebook page

ILOILO CITY—Weary travelers along the Iloilo-Capiz national highway would usually find relief when passing through a stretch of road flanked by tall mahogany trees. The trees provided comfort and respite, especially to those taking public transportation for a three-hour trip between Iloilo and Capiz provinces, and Iloilo and Aklan province, a trip that would take four hours.

But soon, these trees would all be gone.

The trees, mostly about 10 years old, were being cut for a road widening project of the Department of Public Works and Highways (DPWH).

Jim Sampulna, regional executive director of the Department of Environment and Natural Resources (DENR), said he approved last week the cutting of about 300 mahogany trees.

He said this was requested by the local government of Pototan and the DPWH, which is implementing the project. The project involves the widening of the two lane-road into four lanes.

More trees along the national highway in Dingle and Dueñas towns are also scheduled for cutting due to road widening projects.

Sampulna said he authorized the cutting of the trees upon condition that consultations would be held. He said the DPWH also needed to plant 50 trees for each tree felled.

Fallen trees would be entrusted to the DENR, which would be stored so these can be used for projects and activities of the Department of Social Welfare and Development.

He said earth-balling, or transferring trees using a machine, was not feasible because the trees would most likely die.

The trees, Sampulna said, also stand within the road right of way.

Pototan residents were saddened with the cutting of trees.

“Ahay. Kasubo (This is sad),” said Mary Grace Sardinola, in a post on the Facebook page @Pototan.

Some said they would miss the poems displayed on the trees.

Jurgenne Primavera, a retired scientist and environmentalist, said the tree-cutting would result in less oxygen and more carbon dioxide content in the area.

But she said it was important to replace those cut with native trees, instead of exotic varieties.

Growing native trees, she said, are healthier to the environment because these do not emit toxic substances that impact on the growth of other plants.