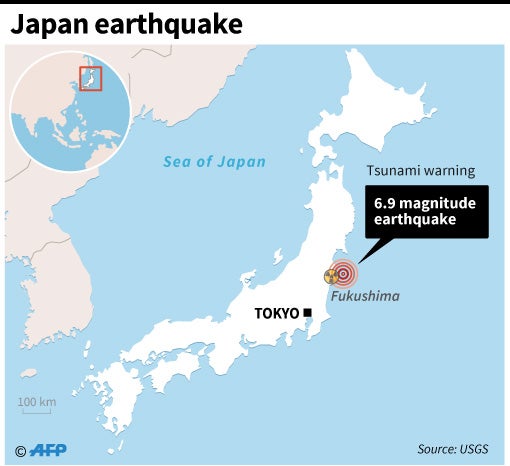 The map shows the epicenter of the 6.9-magnitude earthquake that hit the waters off Fukushima prefecture in Japan on Nov. 22, 2016. AFP

A some three meter (9.9 feet) tsunami could hit the northeastern coast, the agency said, including Fukushima — home to the Fukushima Daiichi nuclear power plant, site of one of the world’s worst nuclear disasters.

The US Geological Agency said the 6.9 magnitude quake, at a shallow depth of 11.3 kilometers (seven miles), struck shortly before 6:00 am (2100 GMT on Monday) in the Pacific off Fukushima.

Japan’s meteorological agency had earlier estimated the quake’s magnitude at 7.3.

While the quake also shook buildings in Tokyo, there were no immediate reports of damage or injuries.

Initial reports said there appeared to be no significant damage to the crippled Fukushima nuclear plant.

Japan sits at the junction of four tectonic plates and experiences a number of relatively violent quakes every year.

A massive undersea quake that hit in March 2011 sent a tsunami barreling into Japan’s northeast coast, leaving more than 18,000 people dead or missing, and sending three reactors into meltdown at the Fukushima nuclear plant.

An announcer on public broadcaster NHK urged residents along the coast to move to high ground.

The vast majority of deaths in the 2011 disaster resulted from the tsunami, and NHK told viewers to heed the lessons of that day. CBB