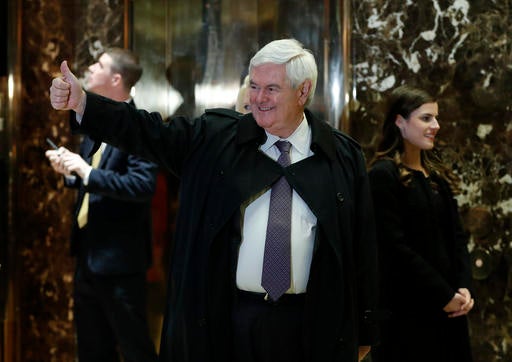 NEW YORK— Donald Trump held court from his perch high above Manhattan on Monday, receiving a line of former rivals, longtime allies and TV executives while overseeing a presidential transition that at times resembles a reality show like the one he once hosted.

Trump met with nearly a dozen prospective hires, all of whom were paraded in front of the cameras set up in the Trump Tower lobby as they entered an elevator to see the president-elect. Out of public view himself, he fell back on his TV star roots by filming a video that touted his legislative goals once he takes office.

Trump did not immediately announce any appointments after the meetings, which came on the heels of a two-day whirlwind of interviews at his golf course in Bedminster, New Jersey.

Unlike his predecessors, who often spoke with Cabinet candidates under a cloud of secrecy, Trump has turned the search into a very public audition process. The extraordinary exercise took on a routine feel on Monday: First, former Massachusetts Senator Scott Brown stepped off the gold-plated elevator into the marble-coated lobby after his meeting to declare to waiting reporters that he was “the best person” to become Veterans Affairs secretary.

Next, Oklahoma Gov. Mary Fallin, a candidate for Interior secretary, did much the same, striding off the lift to say she had “a wonderful discussion” with Trump. Former Texas Governor Rick Perry declined to speak to reporters, but he did take time for a photo with the Naked Cowboy, the underwear-sporting, guitar-strumming New York institution who is normally a fixture at Times Square but has spent recent days camped out at Trump Tower singing about the president-elect.

Democratic Hawaii Rep. Tulsi Gabbard, who resigned from her post on the Democratic National Committee after endorsing Bernie Sanders over Hillary Clinton, also met with Trump but entered and exited out of sight. She later defended crossing party lines to meet with Trump about U.S. involvement in Syria, saying in a statement she would never “play politics with American and Syrian lives.”

Senior adviser Kellyanne Conway said of the visitors, “Not all of them will be in his Cabinet and his federal government, but they are all incredibly important in offering their points of views, their experience and certainly their vision of the country.”

No one was saying whether Trump would announce more appointments before heading to Florida for Thanksgiving. He was planning to leave Tuesday or Wednesday to spend the holiday at his Mar-a-Lago estate, while Vice president-elect Mike Pence will spend Thanksgiving in Mississippi, where his Marine son is stationed.

Trump has largely remained out of sight since winning the election, save for a flurry of brief public appearances over the weekend, often with Pence at his side, to flash thumbs-ups and provide quick updates on his progress in building a government. He remained in the upper floors of his skyscraper Monday, seeking counsel on the phone and interviewing candidates all while keeping an eye on the cable news coverage of the day’s events.

The video he made, expected to be released late Monday, continues the president-elect’s practice of trying to go over the heads of the media and take his case directly to the American public. Since Election Day, he has twice ditched the group of reporters designated to follow his movements and has so far eschewed the traditional news conference held by the president-elect in the days after winning.

Trump has not held a full-fledged news conference since July.

But the media were clearly on his mind as he met with executives and on-air personalities from TV networks. He frequently singled out the media — declaring them “so dishonest” — for criticism during the campaign, but it’s not unusual for presidents to hold off-the-record meetings with journalists when trying to promote policies or programs.

None of the attendees would discuss the meeting with reporters in the lobby, though Conway said it was “very cordial, very productive, very congenial.”

Those Trump met with over the weekend included former Massachusetts Gov. Mitt Romney, a former critic now being considered for secretary of state; retired Marine Corps Gen. James Mattis, who Trump dubbed an “impressive” prospect for defense secretary, and billionaire investor Wilbur Ross, who is under consideration for Commerce secretary.

“We’ve made a couple of deals,” Trump said Sunday. He gave assurances that “incredible meetings” would be bringing “incredible people” into the government.