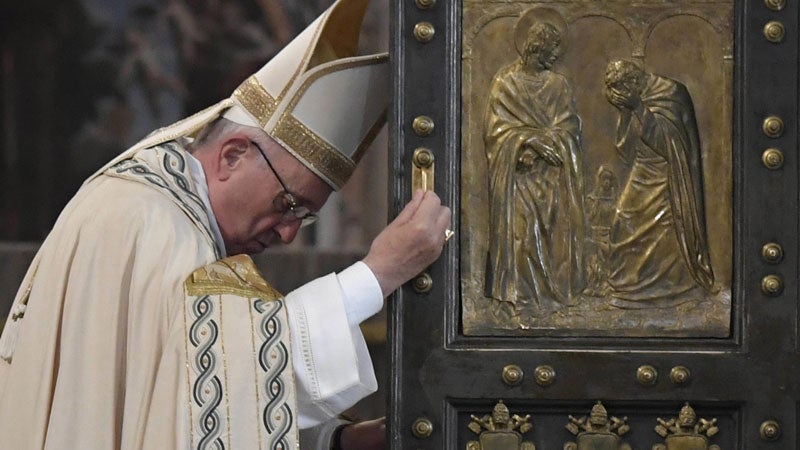 Pope Francis closes the Holy Door of St. Peter’s Basilica at the Vatican, Sunday, Nov. 20, 2016 marking the end of the Jubilee of Mercy. (Tiziana Fabi/pool photo via AP)

VATICAN CITY—Pope Francis on Saturday warned against what he called a “virus of polarization” and hostility in the world targeting people of different nationalities, races or beliefs, as he led a ceremony giving the Roman Catholic Church 17 new cardinals from six continents.

The consistory ceremony at Saint Peter’s Basilica formally inducted the churchmen into the cardinals’ ranks.

Francis used his homily to also caution the new “princes of the Church,” as cardinals are sometimes called, to guard against animosity creeping into the Church as well, saying “we are not immune from this.”

The Pope spoke of “our pitiful hearts that tend to judge, divide, oppose and condemn” and cautioned somberly against those who “raise walls, build barriers and label people.”

Earlier this year, when asked about the plan by Donald Trump, then a Republican US presidential candidate and now president-elect, to build a wall to keep Mexicans and others from illegally entering the United States, the Pope replied that anyone advocating building walls isn’t a Christian.

Francis, in a message a few days earlier to US bishops, urged them to help heal a society facing growing polarization.

On Saturday, after receiving his red hat, Mexican Cardinal Carlos Aguiar Retes, archbishop of Tlalnepantla, expressed concern about Trump’s plans, including deporting large numbers of immigrants living in the United States illegally, soon after he occupies the White House.

The Mexican churchman added: “One thing is the election campaign. Another thing is reality.”

In Saturday’s homily, Francis commented on how “we see, for example, how quickly those among us with the status of the stranger, an immigrant, or a refugee, become a threat, take on the status of an enemy. An enemy because they come from a distant country, or have different customs. An enemy because of the color of their skin, their language, or social class.”

He added: “The virus of polarization and animosity permeates our way of thinking, feeling and acting.”

Francis also lamented the tendency to “demonize” one’s opponents, “so as to have a ‘sacred’ justification for dismissing them.”

Cardinals serve as papal advisers and elect Popes. Pontiffs look to cardinals who share their approach to the Church’s mission in the world.

The clash of mentalities between the conservative camps and the so-called progressives chosen by Francis has played out publicly in recent days.

Four prominent, disgruntled cardinals, including a US prelate, Raymond Burke, who is one of Francis’ most vocal critics, aired in a letter to the Pope their doubts about his more compassionate approach to the contentious issue involving divorced Catholics. —AP