LIMA, PERU—Sparks flew during President Duterte’s first meeting with his acknowledged idol, Russian President Vladimir Putin, on the sidelines of the Asia-Pacific Economic Cooperation (Apec) Economic Leaders’ Meeting here with the Philippine leader lambasting the United States and Western nations as bullies and hypocrites, while praising Russia as a great country.

Mr. Duterte, who had long expressed admiration for Putin’s strongman rule, told the Russian leader that the Cold War had stood between their two countries as the Philippines, a former US colony, was historically identified with the West.

“I have been looking for this moment to meet you, Mr. President, not only because you represent your country but [because] of your leadership, too,” he told Putin, who formally extended an invitation for him to visit Russia.

For his part, Putin congratulated his Philippine counterpart. He called the May 9 election that Mr. Duterte won “indeed a very bright day,” noting it came on the Russian holiday marking victory over Nazi Germany.

Putin said the Philippine leader had done much quickly in “developing the all-around partnership between our countries and with respect to promoting greater trust and confidence between us.”

During their 45-minute meeting, Mr. Duterte unburdened his gripes about what he described was the unequal treatment that the United States had accorded the Philippines as a treaty ally.

But the present setup would soon change, according to Mr. Duterte who has upended the country’s historical military alliance with the United States, repeatedly saying he was shifting toward China and Russia as part of what he described as his independent foreign policy.

“It was good (while) it lasted,” Mr. Duterte told Putin of what he has called his “separation” from the United States.

“Of late, I see a lot of these Western nations bullying small nations. And not only that, they are into so much hypocrisy,” he said.

“And they seem to start a war but are afraid to go to war. That is what is wrong with America and the others. They’ve been waging wars in so many places—in Vietnam, in Afghanistan and in Iraq for one single reason that there was a weapon of mass destruction, and there was none,” he added.

As part of his shift in foreign policy, Mr. Duterte said his country wanted to engage more with Europe.

The talks between the two leaders were held at noon on Saturday (1 a.m. Sunday in Manila) in a hotel room under tight security, with the media allowed to cover only the first 10 minutes of the meeting before they were shepherded out.

Putin, dressed in a dark suit, acted like Mr. Duterte’s host, warmly shaking his hand as well as those of the rest of the Philippine contingent, which included the latter’s right-hand man, Bong Go, and Sen. Alan Peter Cayetano, who both took selfies during the meeting.

For his part, Mr. Duterte did not offer to shake hands with Putin’s subordinates and was the first to take his seat.

The Russian leader was all-smiles at first, but his expression turned serious as an interpreter began translating Mr. Duterte’s rambling litany of complaints against the United States and Western nations.

‘Not a good idea’

He said the United States “forced” the Philippines to contribute soldiers in its wars in Vietnam and Iraq.

“They also got Filipino soldiers in both Iraq and Vietnam and nothing happened … And they [compelled] my country to contribute military forces,” Mr. Duterte said. 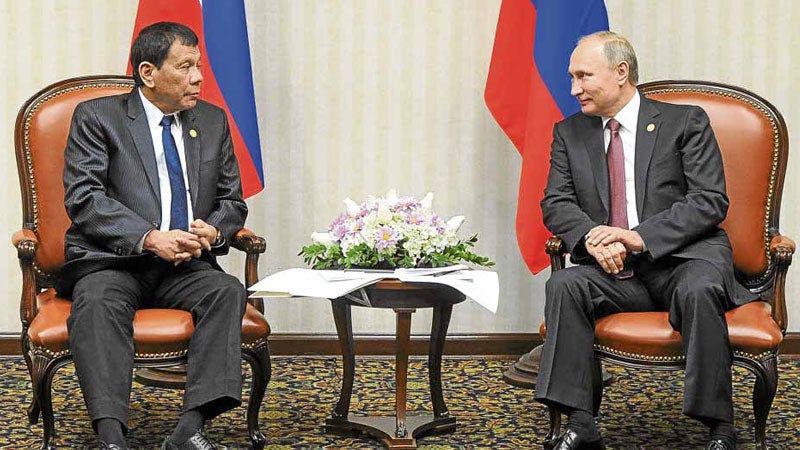 DRIFT TOWARD RUSSIA In his first meeting with Russian President Vladimir Putin in Lima, Peru, President Duterte criticizes the United States and other Western nations as bullies and hypocrites but welcomes strengthening ties with Russia. —AP

He cited the case of Angelo dela Cruz, a Filipino worker who was kidnapped in July 2004 by Iraqi insurgents fighting a US-led campaign to overthrow Saddam Hussein. The kidnappers demanded the pullout of Philippine troops in exchange for the worker’s release.

Then President Gloria Macapagal-Arroyo acceded to the demand of the insurgents, and Dela Cruz was released.

When Manila pulled out its noncombat troops, however, Washington “made it hard for us,” Mr. Duterte told Putin.

“These are the things I see which is not a good idea,” he added.

“We had agreed to really foster stronger trade relationship with Russia. We acknowledge that in the past, somehow, even as we are celebrating long years, 70 or 40 years of diplomatic relations with Russia, our relationship has not really matured especially in the area of trade and investment and commercial relationship,” he said.

“But this time, we are going to push through for it,” Yasay added.

He said Putin had invited Mr. Duterte to visit Russia.

“This will be preceded by a trip that I would have to undertake this December, and I look forward to even a more optimistic and closer and more detailed discussion of the President with the head of state of Russia,” Yasay said.

“That will mark the beginning of our entering into various agreements that will achieve our objective and goals,” he said.

Mr. Duterte missed the gala dinner for Apec leaders on Saturday evening, sending a message to the Peruvian hosts that he was sick.

By staying put in his hotel, he may have avoided a potentially awkward encounter with US President Barack Obama, who canceled a meeting with him at another summit in September after the Philippine leader called him a “son of a whore.” —WITH REPORTS FROM AP AND AFP