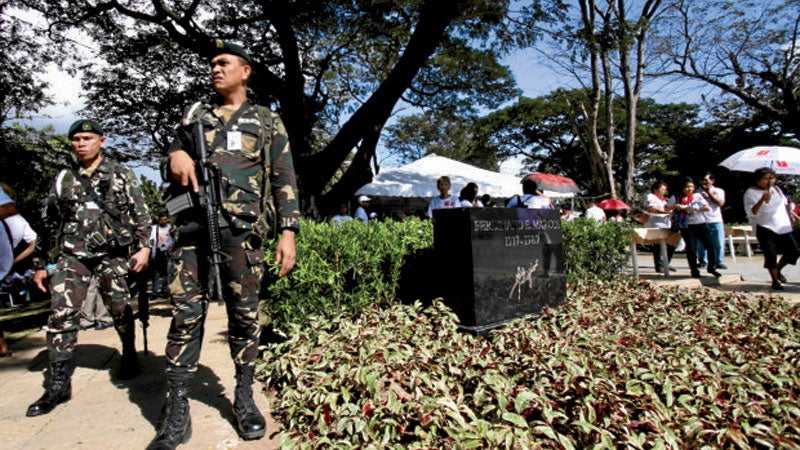 VIGIL AFTER BURIAL Soldiers keep watch at the tomb of the late strongman Ferdinand Marcos after his unannounced burial on Friday drew widespread condemnation, especially from victims of human rights atrocities during his rule. —RICHARD A. REYES

Digging up the remains of Ferdinand Marcos would be “unchristian,” Solicitor General Jose Calida said on Sunday, insisting that Friday’s interment of the deposed strongman at Libingan ng mga Bayani did not violate the Supreme Court ruling on the ticklish issue.

Calida, who led government lawyers in defending President Duterte’s order authorizing the interment, said there was no legal impediment to bar the Marcoses from burying their clan patriarch at Libingan in Taguig City.

In a phone interview, he said urging the magistrates to order the exhumation of Marcos’ body would be against Christian values.

“That is unchristian. I don’t think the Supreme Court will allow that,” Calida said when asked to comment on the plan of some martial law victims to petition the court to unearth Marcos’ remains.

He said the court, in a vote of 9-5 with one abstention, was unlikely to reverse its Nov. 8 decision.

“After deciding by a landslide margin … that there’s nothing illegal in the burial of the remains of Marcos, can you expect the Supreme Court to turn around and say that the remains should be exhumed?” he said. “They’re just shooting for the moon.”

Calida maintained that the status quo ante order, which the court had extended twice, to defer the interment of Marcos, was already lifted when the high tribunal upheld Mr. Duterte’s order.

As in any other cases, he said the court’s action should be deemed “immediately executory” as it did not order the government to further hold the burial pending the filing of motion for reconsideration of the petitioners.

“There was no more legal obstacle for the burial of Marcos,” Calida said.

He said a petition seeking to cite the Marcoses and the Duterte administration in contempt of court “will have no legal basis.”

The solicitor general also maintained that the President’s order to have Marcos interred at Libingan was “an executive action, a political question.”

“The main cases have been dismissed. Once it is lifted, the order is already executory. You don’t have to wait for a motion for reconsideration because the status quo ante order has no basis,” he said.

Read Next
342 motor riders caught
EDITORS' PICK
Alex Eala wins Grand Slam on Independence Day: ‘I hope I made my contribution to the country’
Ahead of ONE: Full Blast II, Mongkolpetch warns Elias Mahmoudi: ‘Watch out for my fists’
Rare earth metals at the heart of China’s rivalry with US, Europe
PNP, PDEA destroy P25.8M worth of marijuana in Kalinga
G7 rivals China with grand infrastructure plan
Kai Sotto continues to inspire Filipinos by sharing his passions and stories with Smart Prepaid
MOST READ
Chel Diokno, Bro. Eddie, Ate Vi decline 1Sambayan 2022 poll nomination
1Sambayan names 6 choices to pit vs Duterte’s anointed in 2022
Groups slam Duterte ‘surrender’ to China
G7 rivals China with grand infrastructure plan
Don't miss out on the latest news and information.