Revival of Bataan nuclear power plant not yet definite 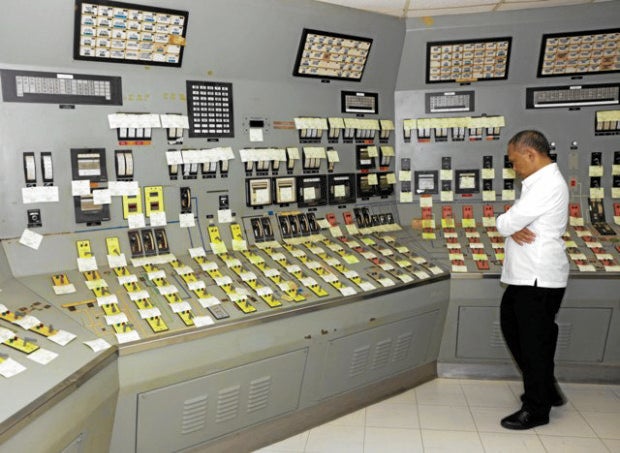 Energy Secretary Alfonso Cusi checks the still neatly sealed and labeled control buttons of the Bataan Nuclear Power Plant. The facility was completed in 1984 at a cost of $2 billion but was mothballed and never produced a singlewatt of electricity. CONTRIBUTED PHOTO

There is nothing definite yet about the revival of the Bataan Nuclear Power Plant (BNPP) while the $1 billion needed to activate the mothballed facility is not included in the 2017 budget, according to Sen. Loren Legarda.

Legarda, defending the budget of the Department of Energy (DOE) Thursday evening, said the proposal to use nuclear power still had to undergo an intensive study.

Energy Secretary Alfonso Cusi was just keeping an “open mind” about the idea of using nuclear power in the country, Legarda added.

Earlier reports said the President had allowed Cusi to proceed with plans to revive the BNPP, but also to pay special attention to safety and security aspects of the plant’s operation.

The DOE has created the Nuclear Energy Program Implementing Organization that would undertake a comprehensive study on the use of nuclear power, guided by the conditions listed by the International Atomic Energy Agency for developing a national infrastructure for nuclear power.

But quoting Cusi, Legarda said the energy secretary “had no clear direction from the President saying that opening BNPP is a clear priority.”

She said energy officials had realized that there were both political controversies and technical issues that might arise from the proposal to put the BNPP to work.

“So No. 1, it is not provided for in the 2017 budget. It will take intense studying and time to be able to answer whether this is a roadmap we want to take,” she said, under questioning from Sen. Sherwin Gatchalian.

Legarda also said it was difficult to determine when the study of the BNPP revival would be completed, pointing out that it would be a complex and technical process.

“[It is a] preliminary study and he is to convince all of us,” she added.

One of the things to be considered is the location of the facility near a fault line, which some said could make its operation dangerous for the Philippines. But there are those who say that the fault line was too far away to pose a threat.

Gatchalian, who chairs the Senate’s energy committee, pointed out that Vietnam had junked a 2,000-megawatt nuclear power plant project due to cost and safety concerns.

“With global sentiments over the nuclear source of energy, they were being cautious, so I think we should take note of that,” he added.

Read Next
‘Again, even in death, he spat at our nation’
EDITORS' PICK
Smart offers wireless fiber-like speeds to Filipino homes with country’s first 5G Prepaid Home WiFi
House OKs bill allowing married women to retain maiden surname
Pandemic prognosis: Where does it go from here?
This new condo in the South will make you want to turn a new leaf
Legarda: Ending Violence Against Women, a cause for all
Google won’t accept election ads for 2022 national polls
MOST READ
Bongbong Marcos to face another disqualification case
Christine Bersola, Julius Babao cleared of cancer after colonoscopy, endoscopy
Former PM Abe says Japan, US could not stand by if China attacked Taiwan
Tropical storm intensifies as it approaches PAR
Don't miss out on the latest news and information.