‘Again, even in death, he spat at our nation’ | Inquirer News
Close
menu
search

‘Again, even in death, he spat at our nation’ 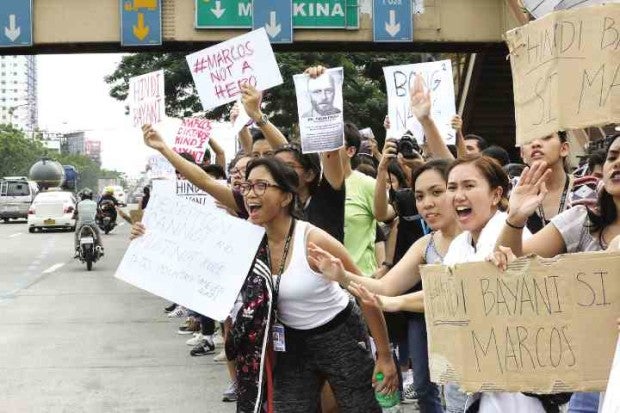 Ateneo de Manila students walk out of their classes to join the protest action on Katipunan Avenue in Quezon City as news broke about the Marcos burial at Libingan ng mga Bayani.—photos by JOAN BONDOC

Nicole Aliasas, a 22-year-old marketing associate, had no time to wait for others to join her outside Libingan ng mga Bayani. Rushing to the area as soon as she heard the news, she found a prominent spot, raised a fist—and then wept publicly.

Zenaida Mique, 64, said she took part in the 1986 Edsa People Power Revolution to topple the Marcos dictatorship, only to find history being “revised and perverted” 30 years later.

Bro. Armin Luistro, former Education Secretary, joined a throng of college students as they poured out into the street, saying “It’s now their generation’s time to fight…”

Though it earned the Supreme Court’s imprimatur last week, Friday’s burial of the dictator Ferdinand Marcos at Libingan—described as “sneaky” and “like a thief in the night” by critics who still hoped for a legal roadblock—caught anti-Marcos protesters off-guard and saw them hastily assembling in various areas across Metro Manila for one more cry of anger.

Mique, executive director of Claimants 1081, a group of martial law victims, was among the hundreds who gathered at People Power Monument in Quezon City hours after the Marcos family laid their patriarch to rest at the “heroes’ cemetery” in Taguig City.

“It’s very characteristic of the family,” Mique told the Inquirer yesterday. “They mocked the processes of the law and stole the right of the people to air their grievances.”

Mique was referring to the 15-day period for the parties opposed to the Libingan burial to file a motion for reconsideration in the Supreme Court, which on Nov. 8 voted 9-5 to throw out petitions against the dictator’s interment at the national pantheon.

Singer Jim Paredes, another People Power veteran, maintained that while the “letter of the law is on [the Marcoses’] side, there’s no morality, truth and sense of reality” in what they did.

“If you are a true Filipino, you feel sad today because you have just been disrespected by the government,” said Paredes, who after the 1986 revolt wrote what became the Edsa anthem “Handog ng Pilipino sa Mundo.”

President Duterte’s approval of the burial showed that his administration is “more sinister” than that of Marcos, he said. “In ’86, you have a regime protecting itself. Now you have a regime rewriting and revising history, making the experience of the Filipino people a lie.” 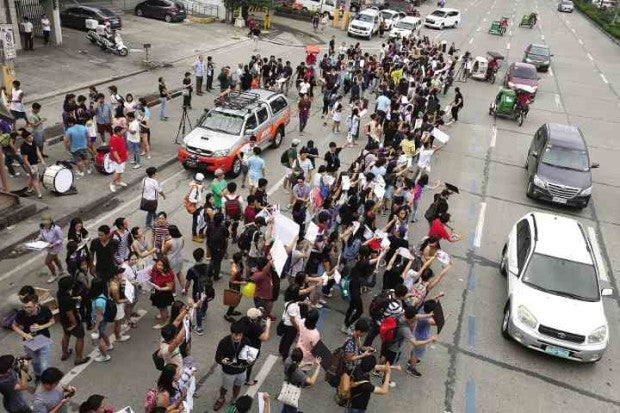 Ateneo de Manila students walk out of their classes to join the protest action on Katipunan Avenue in Quezon City as news broke about the Marcos burial at Libingan ng mga Bayani.—photos by JOAN BONDOC

Aliasas, the first anti-Marcos protester to show up outside Libingan as the burial rites were taking place just before noon, walked past anti-riot policemen who lined the road leading the cemetery.

“His human rights violations, his being a dictator doesn’t [qualify him] to be buried among honorable people. Marcos is not honorable,” she told reporters.

The surprising turn of events overwhelmed social media activist Gang Badoy who, like Aliasas, couldn’t hold back tears as she faced the phalanx of policemen restricting access to Libingan.

“They were as cunning as we were negligent,” said Badoy, who said she came to Libingan also in behalf of her mother, another Edsa participant. “It’s a mammoth inconsistency. We’re honoring the exact person we ousted.”

Also in Quezon City, about 2,500 students, faculty members and staff from the University of the Philippines-Diliman, Ateneo de Manila University and Miriam College joined forces on Katipunan Avenue for  another anti-Marcos demonstration.

Motorists showed their support by honking their horns. One car passenger held up her laptop to show the screen that bore the message: “Marcos not a hero!”

Others cursed the dictator in his native Ilocano dialect: “Uk**am Marcos!”

Carmela Vinzon, Ateneo student council president, called out the names of the Supreme Court justices who voted to dismiss the petitions against the burial. Each name was met with loud boos from the crowd.

“Again, even in death, the dictator has  oppressed us and spat at our nation,” Vinzon said.

Ben Te, councilor of the UP student council, said the solidarity between the three universities showed that millennials are not clueless about history. “We know the stories of our elders who survived the tortures and hardships of the martial law regime,” he said. “To this today, there is no justice for them.”

In Manila, around 30 protesters gathered in front of the Philippine General Hospital, carrying anti-Marcos placards and burning his effigy.

“He stole whatever kind of democracy the Philippines had,” said Bonifacio Ilagan, a victim of martial law atrocities and now spokesperson for the Campaign Against the Return of the Marcoses to Malacañang. His sister was abducted during the martial law years.

For Renato Reyes, secretary general of the militant Bagong Alyansang Makabayan, giving Marcos a hero’s burial was “another step toward whitewashing the crimes of the dictator.”

Around a hundred students of   De La Salle University and neighboring De La Salle-College of Saint Benilde went out of their classrooms and staged a noise barrage, reprising the chant “Marcos, Hitler, diktador (dictator), tuta (lapdog)!”—the soundtrack of anti-Marcos protests in the 1970s and ‘80s.

“Our protest will not end here. If we have to exhume his body, we’ll do it,” one student was heard saying.

Luistro, who served as Education Secretary during the Benigno Aquino administration, said he was “proud of La Salle students for knowing their history well. It’s now their generation’s time to fight for their symbol of democracy.”

At the Makati central business district, about three hundred protesters—mostly young office workers—gathered at Ayala Triangle, even with no apparent leaders telling them what to do.

Ice de Ocampo, a network and systems manager who also teaches in college, admitted that he had somehow failed his students for not telling them enough about the Marcos dictatorship.