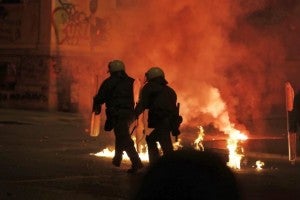 Greek riot police officers run through fire lit by a firebomb thrown by protesters during small scale clashes in Athens, Thursday, Nov. 17, 2016. Several thousand people marched to the US Embassy in Athens under tight police security to commemorate a 1973 student uprising that was crushed by Greece’s military junta, that ruled the country from 1967-74. —THANASSIS STAVRAKIS/AP

ATHENS, Greece — Clashes between anarchists and Greek police broke out Thursday on the sidelines of a peaceful march to the US Embassy in Athens, in an annual commemoration of a 1973 student uprising that was crushed by the military dictatorship which ruled the country from 1967-74.

About 17,000 people marched to the embassy without incident, although some protesters taunted and threw garbage at about 1,000 participating supporters of the governing Syriza party. Some 3,000 police were deployed in central Athens as a precaution.

But the violence came from another quarter of the city. Dozens of anarchists occupied the National Technical University complex, site of the failed pro-democracy revolt, and attacked police with petrol bombs, flares and stones.

Riot police responded with tear gas and stun grenades as street battles lurched outside the university in the densely-inhabited Exarcheia district, well away from the embassy. No arrests or injuries were reported.

The march Thursday began at the gates of the university, also known as the Polytechnic, where in 1973 the military sent in a tank to crush student demonstrations. Several people were killed during the crackdown, but historians disagree on the precise death toll.

The university has been the flashpoint of many anti-government protests over the years. Before the march started, suspected anarchists stole two riot police shields and helmets and hung them on a statue in Exarcheia.

In the northern city of Thessaloniki, Greece’s second-largest city, 8,000 protesters marched to the US Consulate. Anarchists attacked police with petrol bombs, and one group burned a US flag outside the building.

An anti-American protest Tuesday during a visit by President Barack Obama to Athens was marred by extensive clashes around the Polytechnic between anarchists and Greek riot police.

Many Greek left-wing supporters still deeply resent the US for supporting the oppressive dictatorship in Greece at the height of the Cold War.