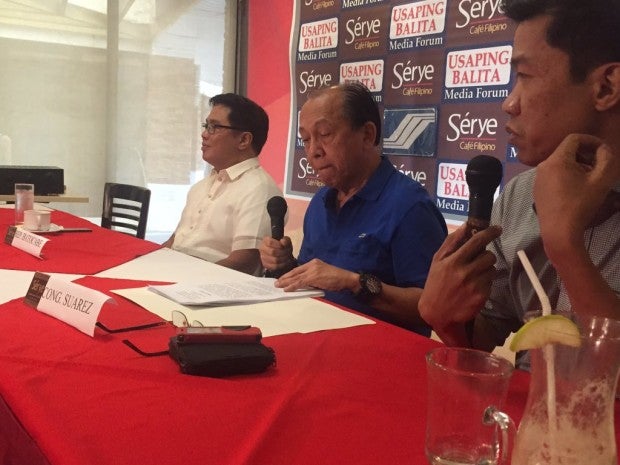 The minority bloc of lawmakers slammed as “arrogant” another faction of the minority assailing the leadership of duly recognized minority leader Quezon Rep. Danilo Suarez.

In a statement on Wednesday, Suarez’s minority group welcomed the petition for mandamus filed by the group of Albay Rep. Edcel Lagman and their minority leader Ifugao Rep. Teddy Baguilat Jr.

The self-titled “Magnificent 7” group of lawmakers who did not vote for the winning Speaker took to the Supreme Court to assail Suarez’s leadership and asked the high court to recognize Baguilat as the rightful minority leader.

“We welcome the filing of the petition so that this issue will finally be put to rest,” the group said, calling the Baguilat faction’s legal move a “desperate attempt to stay in power.”

The Suarez group said their counterpart was being “arrogant” for wanting to sit on both sides of the fence—the Baguilat group comprised mostly of Liberal Party (LP) and ally lawmakers, while the erstwhile ruling party Liberal has aligned with the majority when they voted for Speaker Pantaleon Alvarez.

“The supermajority already includes the Liberal Party. The core of Lagman et.al, also members of the Liberal Party, is insisting that their faction is entitled to minority leadership,” the Suarez group said.

“Their intentions in monopolizing House leadership are evident, with LP members already part of the House Majority while at the same time aiming for Minority leadership,” they added.

The group said the moves of the Magnificent 7 show the “arrogant and entitled posturing of their faction (that) reveals much about their character.”

The Suarez group also refuted their rivals’ claim that they were not fulfilling the role of the opposition as the minority in Congress.

“We do not oppose for the mere sake of opposing. We are a constructive minority,” they said.

“We have been consistent with regard to the policies of this administration: when you are right, we will support you, when you are wrong, we will correct you,” they added.

The minority post spat stemmed from the Speakership race wherein Baguilat placed second place, which makes him according to tradition the rightful minority leader.

But the minority and independent members eventually held a separate elections for the minority leader that won Suarez the post. Suarez’s group, however, was criticized as a “company union” created by the supermajority, an allegation Suarez had denied. RAM