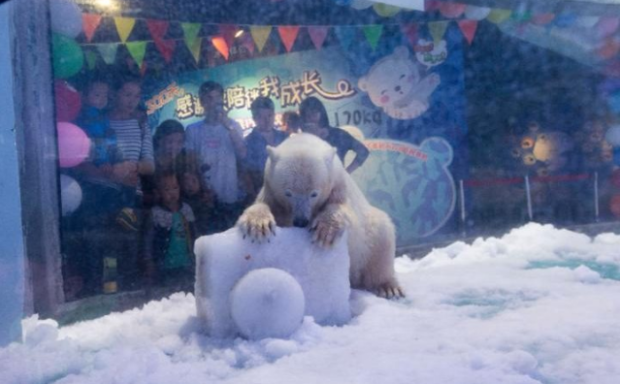 Pizza the polar bear is temporarily removed from his enclosure.  Photo from Weibo

The “world’s saddest polar bear,” which had been caged inside a mall in China as a tourist attraction was finally freed from its enclosure.

The majestic creature named Pizza had “suffered for selfies” while in an aquarium at China’s Grandview Mall, and has been moved to an undisclosed ocean park in North China to reunite with its parents.

Its transfer, however, won’t be permanent as Grandview officials said they are moving it back after they renovate its enclosure, according to BBC News.

HSI representative Peter Li said that the animal should at least be able to “feel the sun on his fur, sniff fresh air and see the sky above him.”

“Pizza the polar bear has endured a life of deprivation and suffering in his small, artificial, glass-fronted room at the shopping mall, so the news that he’s getting out at last makes me very happy and relieved for him. But we implore the mall to make this a permanent move for Pizza,” he was quoted as saying in the report.

“No amount of renovation could ever make a shopping mall a suitable place for this animal, and to send him back now would be cruel and heartless. We commend the mall for being gracious enough to listen to Chinese and global voices of concern, and hope they will do the right thing for this poor bear who has already been through enough,” he added.

Prof. Alastair Macmillan, a veterinary adviser for the HSI, meanwhile, said Pizza should be permanently  freed from its enclosure “as soon as possible” after showing alarming signs of mental decline.

“This polar bear is showing classic stereotypical behavior, including head swaying and repetitive pacing, induced by frustration and poor welfare,” he said.

Over a million people have signed the petition for Pizza’s permanent release as of writing, but the Grandview Mall has yet to address their plea.  Khristian Ibarrola