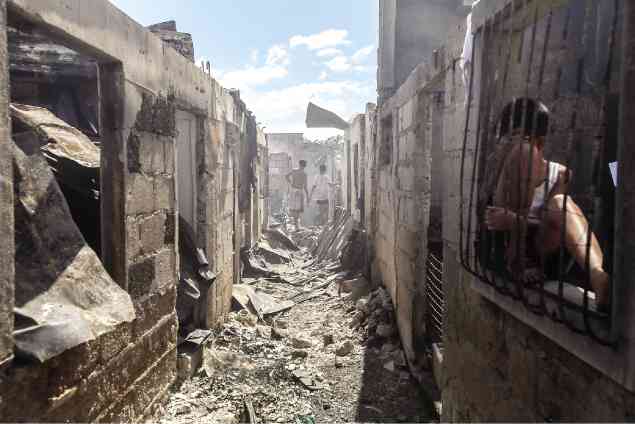 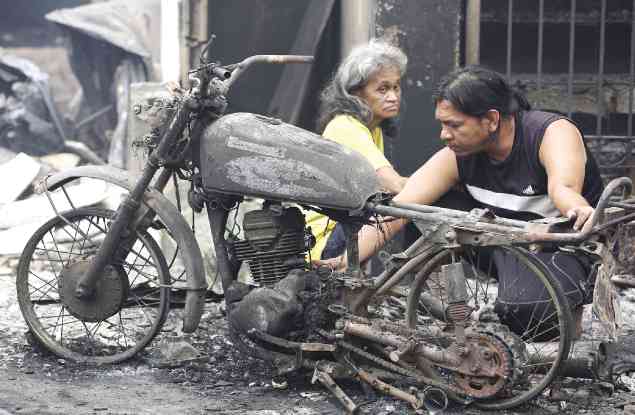 Like survivors in a war zone, residents of Welfareville Compound in Barangay Addition Hills survey the damage after a blaze hit the fire-prone area on Sunday. —NIÑO JESUS ORBETA

The blaze which broke out in an informal settlers’ community and destroyed some 500 houses was the third to hit the fire-prone area this year.

The Bureau of Fire Protection (BFP) identified those killed as Rolly Onchonra, a 29-year-old house painter who was electrocuted while trying to help other people and Wilma Laurena, 26, who was suffering from mental disability.

According to a report submitted to Chief Insp. Robert Samillano, BFP-Mandaluyong City fire marshal, the blaze reportedly caused by a leaking LPG tank started in the house of Alex Naga at Block 35 in Welfareville Compound at 7:45 p.m. Sunday.

At that time, Naga was in Caloocan City and only his two daughters were at home. When the fire broke out, they immediately left the house, investigator SFO3 Victorio Tablay said in his report.

The flames quickly spread through the densely populated area, reaching general alarm—the highest fire alert status—at 9:45 p.m. It was declared under control around 12:30 a.m. Monday before it was finally put out at 3:34 a.m. Total damage to property was estimated at around P10 million.

Samillano said that Laurena was home by herself when the fire broke out. Her relatives, however, began frantically looking for her around 2 a.m., leading to the discovery of her badly burned body at 7:30 a.m.

Their neighbors said the victim rarely left their house because of her mental condition.

Erlinda, the mother of Onchonra, told the Inquirer that her son had a few drinks before the fire. Despite this, he tried to save other people but he fell and was electrocuted.

Erlinda said she tried to drag him away from the danger zone before barangay officers came to her aid and brought the victim to Mandaluyong City Medical Center. Onchonra, however, later died of cardiac arrest.

“We really need help for my son’s burial expenses. I don’t know how we will celebrate Christmas this year. We were not able to save most of our belongings,” she told the Inquirer.

Another victim, Michael Martinez, said the fire killed his five dogs and damaged their apartment.

Around 80 fire trucks from BFP-Mandaluyong, nearby Metro cities and Region 4-A helped put out the blaze. During the fire, 10 explosions were recorded, probably triggered by leaking LPG tanks, Samillano said.

It took hours before the blaze was placed under control because the area where it happened was overcrowded while there was not enough pressure in the water hydrants.

“Addition Hills is not just a drug-prone area. It’s also the most fire-prone area in the city,” Samillano said, adding that a barangay outpost and two gyms were also destroyed by the blaze.

Jimmy Isidro, chief of the Mandaluyong City public information office, said they were looking into the possibility of providing homeowners a substantial amount to help them repair their houses or move elsewhere.