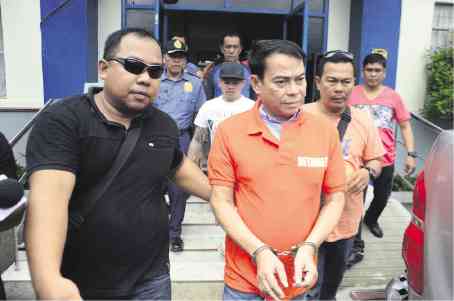 In this Oct. 6, 2016 file photo, Albuera Mayor Rolando Espinosa Sr. is escorted by policemen out of his town’s police station, where he had sought protective custody, following the issuance of two warrants of arrest against him for possession of drugs and unlicensed firearms. —ROBERT DEJON/INQUIRER VISAYAS

MANILA — Sen. Panfilo Lacson has expressed his faith in the determination of the Philippine National Police (PNP) leadership to find the truth behind the Nov. 5 killing of Albuera, Leyte Mayor Rolando Espinosa Sr., as he expressed his belief that the police unit that raided the Leyte prison was really out to get the mayor.

Having said at last week’s Senate hearing that the killing of Espinosa was “premeditated,” Lacson said on Sunday, he has become even more convinced that the mayor was neutralized by a team from the Criminal Investigation and Detection Group (CIDG) Region 8 that staged the search for drugs and firearms at the Baybay sub provincial jail. Lacson said the question of why had yet to be answered.

In a radio program, Lacson, who has been leading the Senate investigation into Espinosa’s killing, discussed details of the police operations by the CIDG team that did not add up.

He said the CIDG team relied on an informant that gave information that should have raised doubts. Lacson said he saw the team’s application for a search warrant last Nov. 5, which included the requirement that it submit a sketch of the layout of the Baybay jail that would prove the informant had personal knowledge that Espinosa and another slain inmate, Raul Yap, had been hiding drugs and firearms.

The sketch did not match the actual layout, he said, adding that the team then should have postponed the search operations and vet their alleged walk-in informant further.

Lacson said the team could have easily sent an operative to go to the jail and check the layout given by the informant.

“I think that the application for a search warrant was to give a semblance of legality for the police operation … You can see that (the team) only had one purpose there, and that is to kill Mayor Espinosa. The puzzle left to us is why,” said the senator, a former PNP chief during the presidency of Joseph Estrada.

He added they already had theories on the motive behind the killing of Espinosa whom he described as a “vital witness” to the illegal drug trade in Eastern Visayas. But the theories are all speculations at this point, according to Lacson, who added that the PNP has been looking at this angle.

“I’m sure this did not involve (Chief Insp. Leo) Laraga and (Supt. Marvin) Marcos only,” he said of the head of the raiding team and the chief of the CIDG region 8 respectively. “If this was just on their level, why the need to kill?”

During the hearing, senators learned that Marcos’ aunt, Leilani Jimenea, was allegedly in the payroll of Espinosa as supposedly shown in the ledger of Espinosa.

Lacson said he had asked Marcos whether he knew Espinosa’s son, Kerwin Espinosa — said to be the biggest drug lord in Eastern Visayas — but the latter denied he knew him. He said he asked Marcos because there was a report that Espinosa contributed to the election campaign of Marcos’ wife Maritess, who ran for vice mayor in Pastrana, Leyte.

Lacson said Kerwin Espinosa, set to be extradited from Abu Dhabi, was a vital witness and that the latter should be secured by the PNP.

Asked whether he thought the PNP could conduct a fair investigation since President Duterte has sided with the police version of Espinosa’s killing, he said: “Based on the latest report I heard from Camp Crame, I believe the PNP will not cover up (the case) but will follow it up. It’s only a matter of explaining in detail to the President on what really happened at the Baybay jail so that he could be enlightened and he could take the appropriate action.” SFM