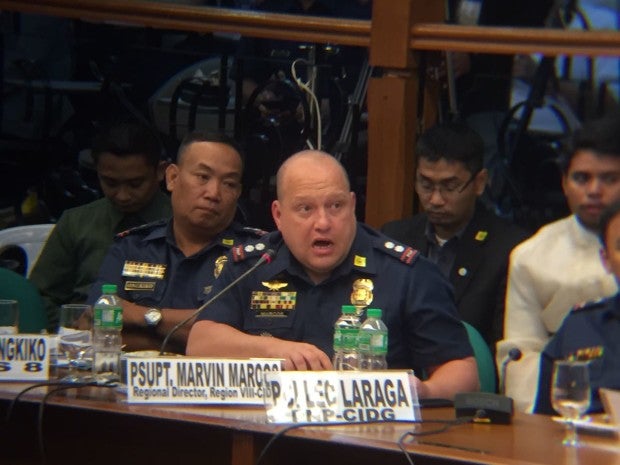 As if justifying the killing of Albuera Mayor Rolando Espinosa Sr. while in a Leyte jail, the regional chief of the Criminal Investigation and Detection Group (CIDG) Eastern Visayas said before the Senate investigation on the death of Espinosa on Thursday that the operatives merely did their job to fight drugs.

Supt. Marvin Marcos, the leader of the police unit that raided Espinosa’s cell at the Baybay sub-provincial jail and killed the alleged drug lord, said he firmly believes in the campaign of President Rodrigo Duterte against drugs.

Duterte won on a campaign promise to eradicate drugs in the country by killing  drug lords, pushers and users. Since he took office in July, more than 3,700 suspected drug users have been killed.

The President on Wednesday said he saw nothing questionable in the circumstances surrounding the death of Espinosa.

“Why should I be puzzled? You have here a guy—government employee—using his office and money of government, cooking ‘shabu’ and destroying the lives of so many millions of Filipinos. So what is there for me to say about it?” he said.

Marcos is one of the 24 cops Philippine National Police (PNP) chief Director General Ronald “Bato” dela Rosa relieved while the Oct. 5 incident is being probed by the PNP’s Internal Affairs Service (IAS).

Incidentally, Marcos’ aunt, Lalaine Jimenea, publisher of a local paper in Ormoc, was included on the list of protectors Espinosa disclosed in his affidavit.

When asked by Senator Manny Pacquiao if the police were protecting anyone, Marcos maintained that he was not protecting any government official Espinosa implicated in the drug business.

Marcos said drug lords in Leyte were taking advantage of the drug war by linking policemen to the illegal drug trade “so they could survive for six years while President Duterte is in office.”

The boxing champion-turned-politician then asked if Marcos has evidence to prove his claim.

The police officer said drug lords would include names of policemen in the affidavits they execute to destroy the reputation of innocent cops.

Marcos maintained that he has been clean since he joined the police service in 1996.