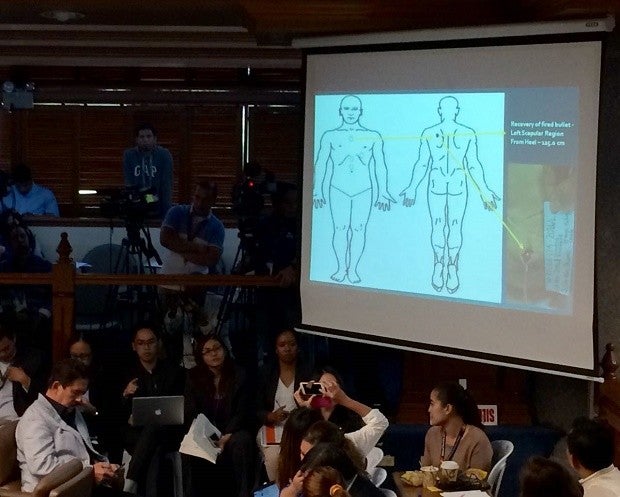 Cadaver of Albuera mayor Rolando Espinosa with gunshot wounds shown at the Senate probe on the mayor’s death. LYN RILLON/INQUIRER

The time and details of Albuera, Leyte Mayor Rolando Espinosa Sr.’s death were conspicuously absent when the relieved head of the Criminal Investigation and Detection Group (CIDG) in Eastern Visayas (CIDG-8) presented its version of the incident during a Senate hearing on Thursday.

Facing the hearing of the Senate committee on public order and dangerous drugs, Police Superintendent Marvin Marcos presented the chronology of events that transpired when his team served the search warrant against Espinosa at the Baybay, Leyte Sub-Provincial Jail before dawn of November 5.

He said meetings and briefings were conducted until 12:30 a.m. the following day before the team proceeded to the provincial jail at 1:40 a.m.

After a series of coordination with concerned police officials, the team finally reached the gate of the jail at 4:10 a.m. of November 5, Saturday.

Marcos said the raiding team was able to enter the jail premises at 4:30 a.m. through the use of the bolt cutter.

From the time of entry, his next report suddenly jumped to the arrival of the scene of the crime operatives (Soco) at 5:58 a.m.

“At 5:58 a.m., the (Soco) arrived sa provincial the jail. About 9: 40 a.m, processing of cell of Mayor Espinosa by Soco was finished and proceeded to the cell of Yap,” Marcos said, referring to the other inmate, Raul Yap, who was also killed in the raid.

Marcos said the search and markings/taggings of evidence at Espinosa’s cell was completed at 10:30 a.m. Ten minutes after, he said, the processing of the slain mayor’s cell was also finished.

Senate Majority Leader Vicente “Tito” Sotto III then asked what transpired between the time the raiding team entered the premises of the jail and the time the Soco arrived at the jail.

Marcos cited the weak signal in the area that prevented him to send text messages and make calls to the raiding team. He said he was outside the jail when the search warrant was served to Espinosa. CDG