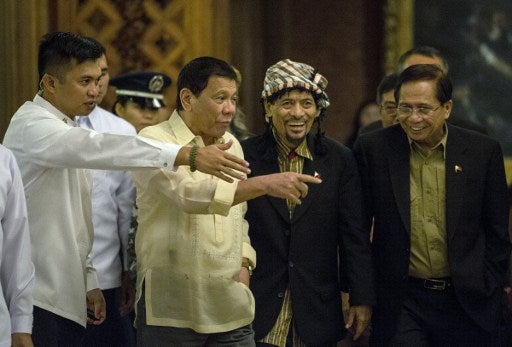 Misuari earlier opposed the Bangsamoro agreement, arguing that it diluted the MNLF’s 1996 Final Peace Agreement with the government.

READ: Misuari vows to work for peace in meeting with Duterte | ‘Misuari must pay’

Dureza, Presidential Adviser on the Peace Process, said Misuari’s group would form a five-person panel to help ensure that remaining commitments in the 1996 agreement would be accomplished.

Misuari reportedly opted out of the reconstituted Bangsamoro Transition Commission (BTC), which will draft a new version of the Bangsamoro Basic Law proposed to Congress.

He was not present during President Rodrigo Duterte’s signing of the Executive Order (EO) reconstituting the BTC although he was in Malacañang the week before to discuss the peace process with the President.

After the EO signing last Monday, Dureza told reporters that proposals from Misuari’s group would be consolidated with the inputs of the BTC and would be submitted to Congress.

“Chairman Nur Misuari has (a) principled position since the BTC is a mechanism of the CAB (Comprehensive Agreement on the Bangsamoro),” Dureza said in a statement.

“Chairman Nur Misuari has (a) principled position since the BTC is a mechanism of the CAB (Comprehensive Agreement on the Bangsamoro),” Dureza said in a statement.

He added that Misuari had not yet abandoned the 1996 agreement.

“They still have reservations in the law as far as the implementation is concerned,” the Secretary said.

Dureza said they trust that Congress would reconcile any differences that may arise from the proposals of the BTC and Misuari’s panel.