Drug suspect killed, 30 others nabbed in QC in a day 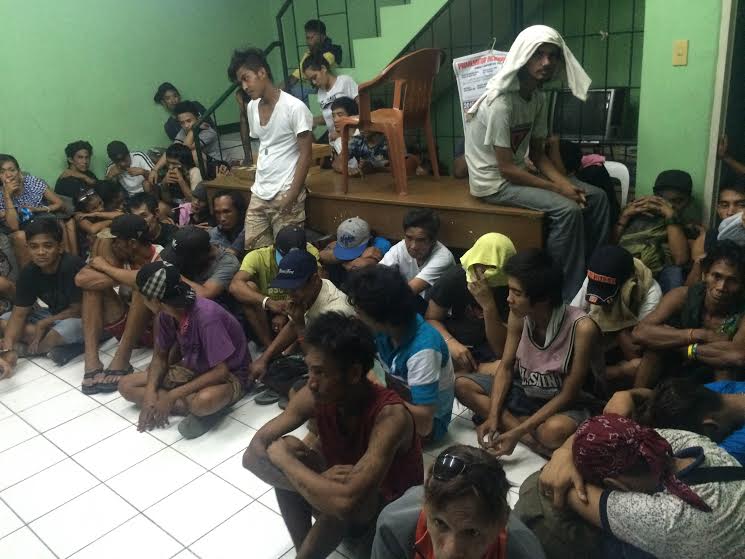 MANILA — Two separate operations by the Quezon City police on Wednesday night led to the death of a suspected drug user and the arrest of 15 individuals in two alleged drug dens.

And from Wednesday morning to Thursday morning, 15 other suspected drug users and pushers were arrested in several operations of the Quezon Police. This means that the Quezon City police arrested a total of 30 persons for drug use or drug pushing in the span of 24 hours.

In Barangay Payatas, operatives of Quezon City Police District-Batasan police station conducted a buy-bust operation against Levi Picache, Enteng Gonzales and an alias “Ace,” who were reportedly known drug pushers in the barangay.

Police reports said that at around 10:30 p.m., only Gonzales and a certain Isaac Pabilona, 32, showed up during the transaction at the former’s house. Before handing over the shabu, however, Gonzales allegedly sensed the presence of the police and closed the gate on the undercover cop.

Gonzales and Pabilona fled on foot from the operatives and later shot it out with the cops. The former reportedly eluded arrest, while Pabilona was declared dead on arrival at East Avenue Medical Center.

Investigation showed that Pabilona was a drug peddler on the watch list of the Batasan police station. He reportedly sold around 15 grams of shabu per day in Barangays Payatas and Bagong Silangan.

Recovered from Pabilona were two sachets of suspected shabu, various drug paraphernalia and a Colt 45 Remington pistol. Police have not released a list of evidence recovered from the drug session.

In Barangay Fairview, around the same time, the District Anti-Illegal Drugs-Special Operation Task Group served a search warrant at the residence of five brothers suspected to be violating Republic Act No. 9165, or the Comprehensive Dangerous Drugs Act.

The Lozano siblings were identified as Ronald, 47; Anthony, 51; Raymond, 43; Mike, and Abbot, all residents of Engineering Street in SSS Village, North Fairview.

In a report submitted to Senior Supt. Guillermo Lorenzo Eleazar, QCPD director, several complaints were allegedly lodged to the village association about the use of the Lozano house as a drug den. The Lozanos
also reportedly surrendered under “Oplan Tokhang” on July, but continued their illegal drug trade in the barangay.

During the operation, Ronald, Anthony and Raymond peacefully surrendered to the cops, while Mike and Abbot were not in the vicinity. Police also arrested Louie Canapi, 37, and Marlon Aldea, 43, who were allegedly engaged in a pot session during the raid.

Retrieved from the den were 10 sachets of suspected shabu, several drug paraphernalia and four cell phones.

From Wednesday morning to Thursday morning, 15 other suspected drug users and pushers were arrested in several operations of the QC police.  SFM/rga

Read Next
Hitman kills member of Pasay anti-pollution unit
EDITORS' PICK
COVID-19 has infected more than 69,000 people globally
Xi’s early involvement in virus outbreak raises questions
The Najima Drive: Nissan’s MD drives #GoAnywhere adventures in new video series
Can Your Brand of Meat Be Trusted? Here’s How to Know You’re Eating Safe Meat
COVID-19 screening checkpoints remain for those going to Boracay
Can travel make you fall in love?
MOST READ
2,000 iPhones given for free by Japanese gov’t to passengers stuck on ship due to coronavirus
WATCH: Sarah Geronimo dances ‘fierce’ version of ‘Tala’
Duterte can be greatest President yet – Joma Sison
Poe to solons: If ABS-CBN franchise deemed extended, put it in writing or declare it
Don't miss out on the latest news and information.