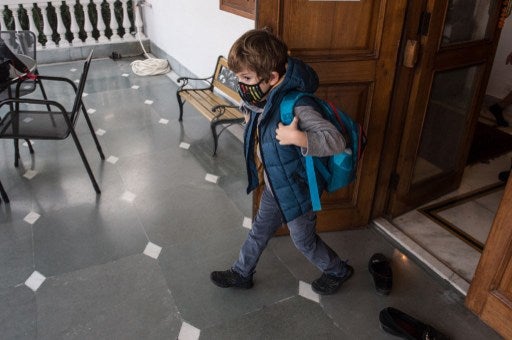 This file photo taken on November 18, 2015 shows Tiberius, 5, wearing a face mask in New Delhi. India’s capital has the world’s most polluted, according to the World Health Organization (WHO).
Some 300 million children live with outdoor air so polluted it can cause serious physical damage, including harming their developing brains, the United Nations said in a study released on October 24, 2016. AFP FILE PHOTO

WASHINGTON—Some 300 million children live with outdoor air so polluted it can cause serious physical damage, including harming their developing brains, the United Nations said in a study released Monday.

Nearly one child in seven around the globe breathes outdoor air that is at least six times dirtier than international guidelines, according to the study by the UN Children’s Fund (Unicef), which called air pollution a leading factor in child mortality.

Unicef published the study a week before the annual UN climate-change talks, with the upcoming round to be hosted by Morocco on November 7-18.

The agency, which promotes the rights and well-being of children, is pushing for world leaders to take urgent action to reduce air pollution in their countries.

“Air pollution is a major contributing factor in the deaths of around 600,000 children under five every year, and it threatens the lives and futures of millions more every day,” said Anthony Lake, executive director of Unicef.

“Pollutants don’t only harm children’s developing lungs. They can actually cross the blood-brain barrier and permanently damage their developing brains and, thus, their futures. No society can afford to ignore air pollution,” Lake said.

The air is poisoned by vehicle emissions, fossil fuels, dust, burning waste and other airborne pollutants, it said.

South Asia has the largest number of children living in such areas at about 620 million, followed by Africa with 520 million and the East Asia and Pacific region with 450 million.

The study also looked at indoor air pollution, typically caused by burning coal and wood for cooking and heating.

Together, outdoor and indoor air pollution are directly linked to pneumonia and other respiratory diseases that account for almost one death in 10 in children under the age of five, making air pollution a leading danger to children’s health, Unicef said.

The agency noted that children are more susceptible than adults to indoor and outdoor air pollution because their lungs, brains and immune systems are still developing and their respiratory tracts are more permeable.

The most vulnerable to illnesses caused by air pollution are children living in poverty, who tend to have poorer health and little access to health services.

Unicef is calling for more robust measures to reduce pollution, increase children’s access to healthcare and to monitor and minimize children’s exposure to polluted air.