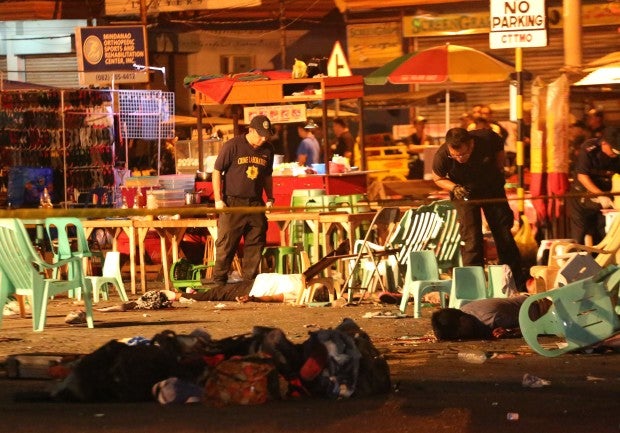 Crime scene investigators process the bombed night market outdoor restaurant in Davao City on Sept. 2, 2016. Fourteen people were killed and dozens were wounded in the first bombing attack on a civilian area under the Duterte administration. The Abu Sayyaf has been blamed for the attack but suspects from groups sympathetic with the bandit group have been nabbed. (AP FILE PHOTO)

MANILA — Police and military agents are flying to Manila the four other suspects in the Davao City night market bombing who were arrested in Cotabato City and Maguindanao early Friday.

In a statement, the Philippine Army commander, Lt. Gen. Eduardo Año, said the government would not stop until all involved in the Davao bombing were put in jail.

“The Army will continue haunting other terrorists for the protection of the public and to serve justice,” he said.

The four arrested suspects are under the custody of the Philippine National Police, which is preparing charges of violations of Republic Act No. 10591 or the Comprehensive Firearms and Ammunition Regulation Act of 2013, and RA 9371 or the Human Security Act of 2007.

Operatives of the various units of the PNP-Autonomous Region in Muslim Mindanao, the Philippine Army and the National Intelligence Coordinating Agency conducted the raids using a search warrant issued by Judge Banzawan Ibrahim of the Cotabato RTC.

The Philippine Army spokesman, Col. Benjamin Hao, said the locations of the hideouts of the Maute Group, the armed militant Islamist organization tagged responsible for the Davao bombing, were passed on to the government by an intelligence agent and later verified by follow-up operations.

The arrest of the additional suspects, followed the apprehension last Oct. 4 of three others, namely TJ Tagadaya Macabalang, Wendel Factural, and Musaili Mustapha, who have been charged by the Department of Justice in Manila.

Investigators have said more than a dozen members of the Maute Group are believed responsible for the Sept. 2 Davao City bombing.

The military earlier said the Davao bombing was meant to the distract government from its all-out offensive against the bandit group Abu Sayyaf in Basilan and Sulu and to attract attention from the terrorist Islamic State of Iraq and Syria (Isis).

Fourteen people were killed and about 70 others were injured in the bombing.  SFM