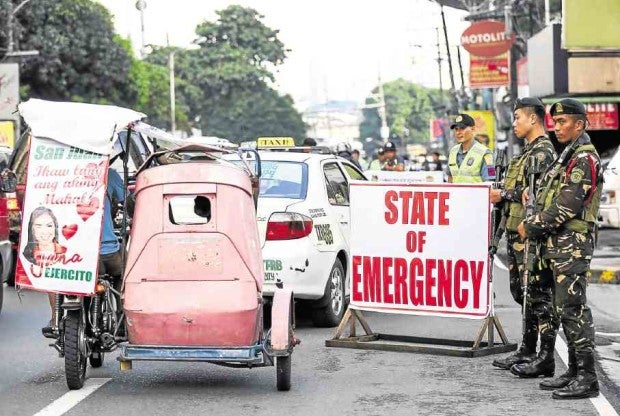 In this Sept. 9 photo, a checkpoint along Granada Street in Quezon City manned by the police and Army personnel reminds the public of the country’s alert status since the Sept. 2 Davao City bombing. INQUIRER PHOTO

President Rodrigo Duterte on Saturday ordered the dismantling of all police checkpoints nationwide, except in certain instances.

“Except really if it necessary, only if there is specific reason to do it, I am ordering all checkpoints dismantled,” Duterte said in his speech during the launching of the Comprehensive Reform and Development Agenda at the Shariff Kabunsuan Cultural Complex in Cotabato City.

He said checkpoints should be conducted only if necessary.

The President placed the country under a state of national emergency following the deadly blast at a crowded market in his hometown Davao City. The bombing killed 15 people and injured dozens more.

The state of national emergency remains in effect until it is lifted by the President.

Reduction of hunger in Mindanao is top priority, says Duterte