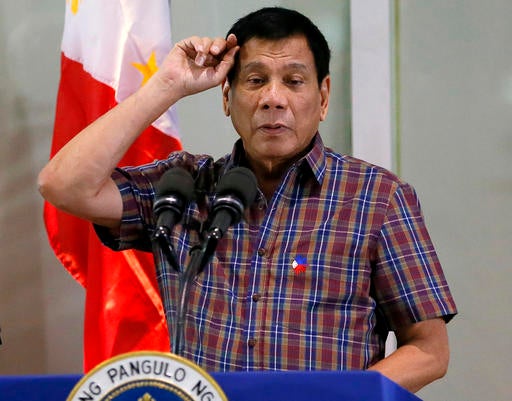 FILE – In this Aug. 31, 2016, file photo, Philippine President Rodrigo Duterte gestures as he addresses Overseas Filipino Workers who were repatriated back to the country at the Ninoy Aquino International Airport in Pasay city, south of Manila, Philippines. Duterte, who disparaged the pope and others who controvert his worldview, warns U.S. President Barack Obama on Monday, Sept. 5, 2016, not to question him about extrajudicial killings. (AP Photo/Bullit Marquez, File)

President Rodrigo Duterte signed a proclamation on Monday declaring a state of national emergency on account of lawless violence, a Palace official said.

He also stressed that terrorism was the main reason for the proclamation.  The recent acts of terrorism such as the kidnappings, beheadings and the deadly Davao bombings prompted Duterte to sign the proclamation, he explained.

The proclamation will be put in place as long as the President finds it necessary, Medialdea said.

Duterte declared a state of lawlessness on Saturday, a few hours after the Davao night market bombing late Friday night that killed 14 people and injured dozens.