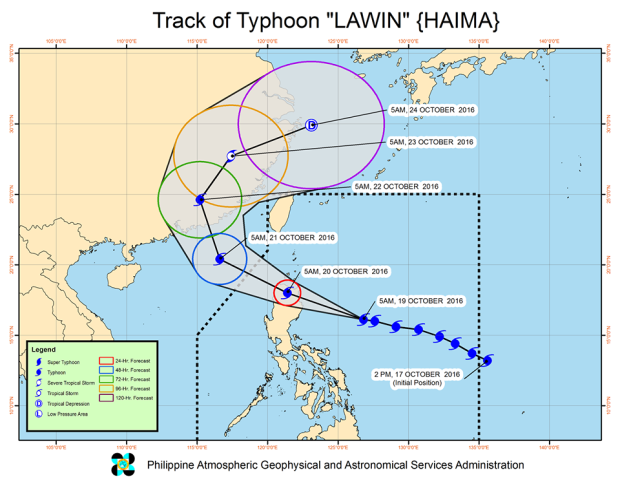 This image from Pagasa shows the forecast track of Typhoon Lawin.

Signal No. 5 has been raised over Cagayan and Isabela.

Lawin packed maximum sustained winds of 225 kilometers per hour near the center and gustiness of up to 315 kph, the Philippine Atmospheric Geophysical and Astronomical Services Administration said in its 2 p.m. bulletin.

The provinces of Batanes Group of Islands, Pangasinan, rest of Aurora, Tarlac, Nueva Ecija, Northern Zambales, and Northern Quezon including Polillo Islands were placed under Signal No. 2.

Pagasa said Lawin is projected to make landfall over Cagayan-Isabela area late Wednesday evening or early Thursday, between 11 p.m. and 2 a.m. After landfall, it will cross Apayao and Ilocos Norte.

The typhoon was last located 300 kilometers east of Aurora, moving at a speed of 24 kph west northwest.

The violent typhoon will bring moderate to heavy intense rains within its 800 km radius.

Lawin is the first supertyphoon to hit the country since Yolanda (international name Haiyan) in 2013.