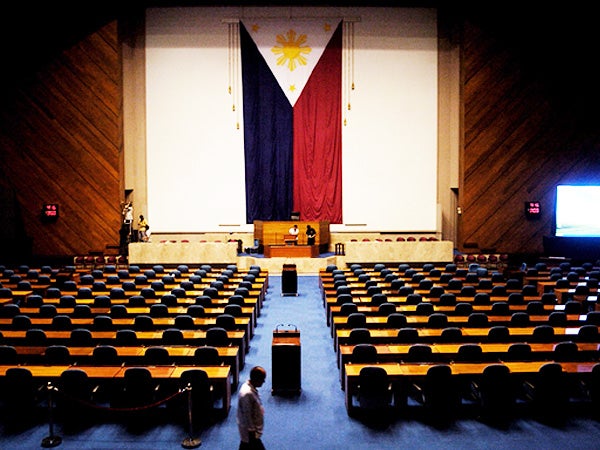 The House of Representatives constitutional amendments committee on Wednesday approved the concurrent resolution calling on Congress to convene in an assembly to propose amendments to the 1987 Constitution.

At least 32 members of the committee vote for the concurrent resolution urging Congress to convene itself into a constituent assembly (Con-ass), to propose amendments to the Charter.

“The committee on constitutional amendments approves the concurrent resolution calling for Congress of the Philippines to constitute itself as a constituent assembly for the purpose of proposing amendments to or revision of the 1987 Constitution,” chairperson Southern Leyte Rep. Roger Mercado said, banging the gavel.

The committee voted by viva voce, and the members who voted for the concurrent resolution stood up.

Seven lawmakers voted against the resolution, while three lawmakers abstained.

The committee also formed a technical working group to consolidate the bills calling for Con-ass.

In opposing the resolution, Liberal Party stalwarts Batanes Rep. Henedina Abad and Dinagat Islands Rep. Kaka Bag-ao said the Constitution should be subjected to constitutional convention for amendments, and not to the whims of Congress convening in an assembly.

“The means are as important as the end. I believe Con-con is the most democratic and most representative process in revising our Constitution,” Bag-ao said.

(In the depth and sensitivity of this issue, we should not only be the ones talking, but also the basic and important sectors in our society. That’s why I believe there should be elections of delegates from different sectors through Con-con.)

Buhay Rep. Lito Atienza said he opposed Con-ass because district and party-list representatives did not win in an electoral campaign of amending the Charter.

“We are all elected as congressmen of our districts and parties, and not one of us in this committee have promised that if elected, I would revise the Philippine Constitution. So therefore, this is a breach of our contract with the electorate, who sent us here to to deliberate on laws, and not to tinker on the Constitution,” Atienza said.

Responding to other solons’ claims the approval of the resolution was out of order, Deputy Speaker and Cebu Rep. Gwendolyn Garcia denied the committee was railroading Charter change.

“The motion was definitely not railroaded,” Garcia said.

The concurrent resolution said Con-ass is the “preferred mode under the present circumstances” and that Congress has the ascendancy to amend the charter because its composition “is reflective of the constituencies and the diverse sectors of society it represents.”

“(Congress) when convened as a constituent assembly has the capacity and background to effectively introduce amendments to the Constitution,” the concurrent resolution read.

The House is tackling Charter change following a call of President Rodrigo Duterte for Congress to convene in an assembly to propose amendments to the Constitution, particularly changing the form of government from unitary to federal parliamentary.

Under Article 17 of the Constitution, there are three modes of amending the charter.

Under Section 1, one mode of Charter change is through a Con-ass where Congress upon a vote of three votes of its members may propose amendments.

Section 1 also provides for a Con-con where delegates will be elected by the public to propose amendments.

READ: Alvarez gets ball rolling for Con-com with draft EO

Duterte is set to issue an executive order creating a constitutional commission to aid Congress in crafting a revised Charter.

The previous hearing by the committee was cut short after a spat that almost escalated to a brawl between Surigao Del Norte Rep. Robert “Ace” Barbers and Surigao Del Sur Rep. Prospero Pichay Jr. The conflict may have stemmed from a deeper political rift between the two congressmen. RAM

READ: Political rift may be behind Barbers-Pichay spat