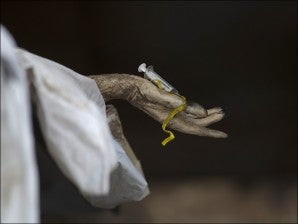 In this picture taken Monday May 16, 2011, the hand of a corpse hangs from a bed with a syringe that is being used by forensic experts at a makeshift morgue inside a refrigerated container as they try to identify bodies found in mass clandestine graves in Durango, Mexico. In the past two months, 219 bodies have been found in this city in at least seven clandestine mass graves. (AP Photo/Dario Lopez-Mills)

DURANGO, Mexico— The vacant car repair lot hardly looks out of place in a vibrant but gritty part of the northern colonial city of Durango, famous as the set for John Wayne westerns.

Only a closer look reveals the secrets hidden at “Servicios Multiples Carita Medina,” clues to exactly what kind of “multiple services” were rendered. The freshly turned soil is sprinkled with lime to kill the smell and littered with discarded Latex gloves and an empty cardboard box: “Adult Cadaver Bag. 600 gauge, Long Zipper, For Cadavers of up to 75 inches. 15 pieces.”

In the most gruesome find in Mexico’s four-year attack on organized crime, police dug up 89 bodies in the repair lot, buried over time in plain sight of homes, schools and stores.

Then, like the killers, authorities left one of Mexico’s most puzzling crime scenes completely open and unprotected.

It was the largest of seven graves found in bustling urban areas of the city of almost 600,000, where a total of 219 bodies have been uncovered since April 11.

Publicly, authorities say they don’t know who’s inside the graves in a state that was home to Mexican revolutionary Pancho Villa, but that today is more synonymous with the country’s powerful Sinaloa drug cartel. Officials only say the mass graves probably hold the corpses of executed rivals from other gangs or possibly kidnap victims and even some police.

A new and more detailed account, however, comes from a top federal police official, who spoke on condition of anonymity to The Associated Press because of security reasons. The official said investigations indicate the grave holds rivals of the Sinaloa cartel, and that the once orderly and brutally efficient gang is undergoing a bloody internal power struggle in Durango.

The Sinaloa cartel had seemed immune to the kind of missteps, mindless violence and internal power struggles that have plagued other drug gangs, to the extent that most Mexicans believed the Sinaloa cartel was either exceedingly sophisticated or in cahoots with the government.

But the portrait now emerging from the 219 corpses is of a cartel that is riven by internal cracks, according to the official.

In recent months, at least two local groups sought to break off from Sinaloa and control the drug shipment routes through Durango for themselves, the official said. A third group, known as the “M’s,” remained loyal to Sinaloa boss Joaquin “El Chapo” Guzman, who has been named one of the richest and most influential people in the world by Forbes magazine, with a fortune of more than $1 billion.

A leading member of the “M’s” and the fourth-highest ranking Sinaloa operator in Durango, Bernabe Monje Silva, was arrested by federal police on March 27 and led police to the grave sites, the police official said.

Jorge Chabat, a Mexican expert on the drug trade, said that while the Sinaloa cartel is one of Mexico’s most stable gangs, it has had internal divisions, as witnessed several years ago when the Beltran Leyva brothers broke off to form their own cartel.

Chabat said disputes like the one in Durango “are part of the jockeying that goes on in the world of drug trafficking” and said the split will probably result in increased violence in Durango.

The Sinaloa and Zeta cartels had already been in a dispute for remote territory in Durango long dismissed as narco-land. Cartels grow marijuana and poppies in the secluded mountains, where outsiders don’t go without military escorts and rumors have it that Sinaloa boss Guzman himself has been hiding.

In April, the discovery of 183 bodies in 40 graves in the northeastern border state of Tamaulipas caused an international furor, as families from the U.S., Mexico and Central America showed up in search of loved ones who had been reportedly pulled off buses, then vanished in the vast reaches of farmland near San Fernando, the scene of two mass killings in less than a year.

The Mexican government reinforced its troops there and made a sweep of 74 alleged Zetas members and collaborators — including some local police— whom officials say were responsible for the deaths.

The larger discovery in Durango, however, has been met with little more than a shrug and the swearing by neighbors that they never heard or saw anything unusual as assassins buried scores of bodies under city streets.

In fact, it can sometimes seem like the region was written off long ago as narco-controlled territory. Last week, no one was lining up to look for loved ones or to give DNA even as the difficult task of identifying bodies continues.

Some of the corpses in Durango have been in the ground less than six months, buried since the Sinaloa cartel’s internal dispute broke out; others have been there for as long as four years.

In some cases, the remains are nearly skeletal after months or years in the desert-like conditions of Durango, whose state symbol is a scorpion.

Working in refrigerated trailers brought in after the sheer number of bodies outstripped the capacity of the city’s morgue, experts wearing masks and sterile suits struggled to detect identifying signs, tattoos or fingerprints from the bodies that still retained some skin.

Piles of cadavers in white plastic body-bags were stacked along a wall of the trailer, awaiting examination.

Authorities have only identified one victim so far, a 31-year-old man from the state of Durango. They would not give his name or other details.

Questions remained about how the gunmen could have used the burial ground to dump bodies for so long without being caught.

“The bodies weren’t buried all at one time, it was done gradually,” said Jorge Antonio Santiago, the spokesman for the Durango State Human Rights Commission. “In the face of that fact, we are also demanding an explanation of why nobody detected this.”

Some argue that police in Durango may have turned a blind eye to the grim goings-on in their city, though none have been implicated, unlike in the Tamaulipas killings.

A few nearby homes have a view of the lots, as does a private school, but invariably local residents say they saw nothing.

“I never imagined that something was happening here,” said a woman who was walking by one the lots last week. The woman, who would not identify herself for fear of reprisals, said the owner of the lot lived in the United States and rented out the property.

Looking over the sandy soil, the woman expressed the same fear and resignation that has permeated northern Mexico after 4½ years of drug violence that’s claimed over 35,000 lives.

“Of course it is disturbing … but what can you do?” she asked.

A woman selling used clothing near another mass grave three blocks away, where 17 bodies were found, said she had occasionally seen luxury vehicles drive by, but never noticed anything suspicious. She believes the victims were brought in, already dead, and quietly buried at night, protected by darkness and a pervasive cloak of fear.

“If anyone talks,” she said, “they might get their head cut off.”