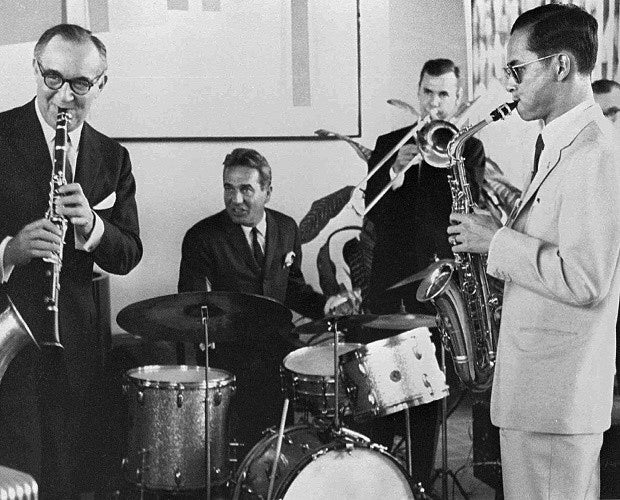 In this July 5, 1960, file photo, Thailand’s King Bhumibol Adulyadej, right, plays the saxophone during a jam session with legendary jazz clarinetist Benny Goodman, left, drummer Gene Krupa, second left, and trombonist Urbie Green in New York. Aside from his kingly duties _ and they were immense _ Thailand’s late King Bhumibol Adulyadej took time out during his 70-year reign to compose music (and jam with some of the world’s jazz legends), build sailing craft (and win an international yachting race), paint surrealistic oils and have some 20 patents registered for an assortment of inventions. AP FILE PHOTO

BANGKOK — Aside from his kingly duties — and they were immense — Thailand’s late King Bhumibol Adulyadej took time during his 70-year reign to compose music (and jam with some of the world’s jazz legends), build sailing craft (and win an international yachting race), paint surrealistic oils and have some 20 patents registered for an assortment of inventions.

Here’s a look at the many avocations pursued by Bhumibol, who died last week at the age of 88:

“He is simply the coolest king in the land,” declared American jazz great Lionel Hampton of Bhumibol’s talent on the saxophone. He also played clarinet, trumpet and the piano, often with his own palace band, and one of the highlights of a 1960 visit to New York was a two-hour jam session with Benny Goodman.

Largely self-taught, he is credited with nearly 50 compositions, including a three-movement ballet previewed in Vienna and songs that are still frequently heard in Thailand, including “Falling Rain” and “Candlelight Blues.” Six of his songs were included in a 1950 Broadway musical, “Peepshow,” with one, “Blue Night,” described by one critic as a “sensuous beguine.”

Having tinkered since childhood and studied some science and engineering in Switzerland, the king came up with inventions throughout much of his reign, with 20 patents and 19 trademarks registered under his name and some garnering international awards. Most were related to rural development, although he also configured a new gun mount on helicopters and offered ideas on how to prevent the M-16, the standard US assault rifle in the Vietnam War, from jamming.

Pondering how to prevent annual flooding in Bangkok, he recalled from childhood pet monkeys munching on bananas, then retaining the food in their cheeks to later swallow. The king’s “monkey cheeks” initiative featured reservoirs on the peripheries of Bangkok into which onrushing water was diverted and later flushed into the sea or used for irrigation.

His inventions included a biofuel from palm oil and the low-cost Chaipattana aerator, which resembles a paddle wheel on old steamers and can be inserted into rivers, canals and marshes to counter water pollution. The aerators can be seen across Thailand, including at the royal residence in Bangkok.

Bhumibol was 8 when he got hold of his first camera — a Coronet Midget given by his mother — and rarely was one out of reach through most of his life, capturing both domestic scenes and documenting his efforts to improve rural lives.

The king’s more than 60 sculptures and paintings range from traditionally realistic to expressionistic and abstract. Some are starkly contemporary.

“This is called ‘Subversion’ — there is greed, anger and evil. I painted it with a knitting needle,” he said of one.

The king also penned several books, including one about a beloved stray dog that he had adopted.

A keen sportsman until hobbled by illnesses over the past decade, he teamed up with one of his daughters to win a yachting gold medal in the 1967 Southeast Asian Peninsular Games. A year later, he challenged another royal sailor, Britain’s visiting Prince Philip, to a race.