Battle to retake Mosul from ISIS has begun — Iraq PM 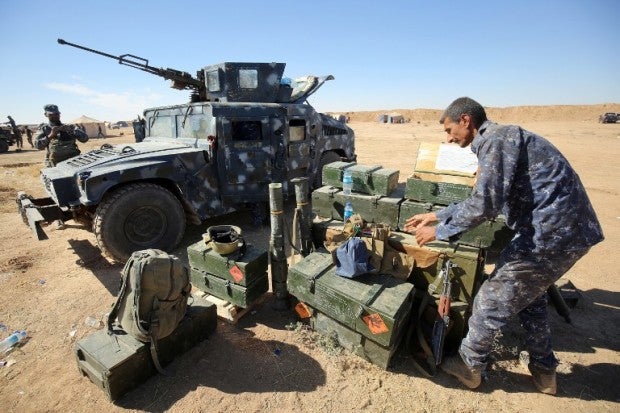 An Iraqi policeman unloads ammunition at the Qayyarah military base, about 60 kilometers (35 miles) south of Mosul, on October 16, 2016, as they prepare for an offensive to retake the city, the last ISIS-held city in the country, after regaining much of the territory the jihadists seized in 2014 and 2015. AFP PHOTO

“The time of victory has come and operations to liberate Mosul have started,” he said in an address broadcast by the Iraqiya channel.

“Today I declare the start of these victorious operations to free you from the violence and terrorism of Daesh (ISIS),” he said, addressing residents of the Mosul region.

Abadi, the commander-in-chief of Iraq’s armed forces, was surrounded by top federal officers as he read his statement.

Iraqi federal and allied forces have been tightening the noose on Mosul, the jihadist organization’s main stronghold in the country, for months.

“The force leading liberation operations is the brave Iraqi army with the national police and they are the ones that will enter Mosul, not others,” Abadi said.

They recently retook key positions around Qayyarah, a town some 60 kilometers (35 miles) south of Mosul, setting the stage for a final push on IS’ northern bastion.

Abadi did not provide details of the military operations launched overnight.

Mosul and its surroundings cover a vast area and the various — sometimes rival — forces involved have some distance to cover before they can enter the city proper.

Kurdish peshmerga forces have been moving in from the eastern side of the city while a US-led coalition is also providing support in the air and on the ground.

The premier vowed that only government forces would enter Mosul, a Sunni-majority city that IS seized with relative ease in June 2014 partly because of deep local resentment towards Shiite-dominated security forces.

“The force leading liberation operations is the brave Iraqi army with the national police and they are the ones that will enter Mosul, not others,” Abadi said.

The Hashed al-Shaabi paramilitary organization, which is dominated by Tehran-backed militia groups, has made clear it wants to take part in the Mosul operation.

Kurdish peshmerga forces have been moving in from the eastern side of the city while a US-led coalition is also providing support in the air and on the ground. CBB