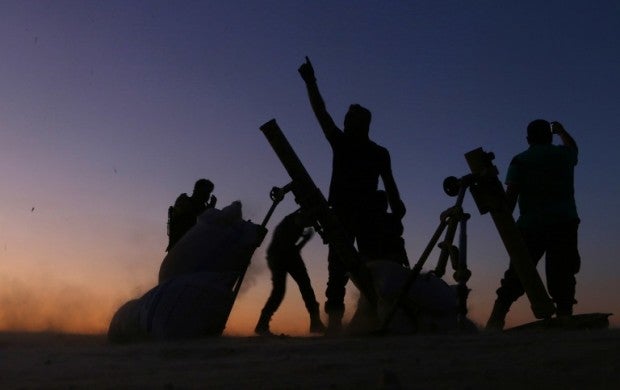 Fighters from the Free Syrian Army cheer and react as they fight against the Islamis State of Iraq and Syria (ISIS) jihadists on the outskirts of the northern Syrian town of Dabiq, on October 15, 2016. Turkish-backed fighters were advancing on Dabiq, which has become a rallying cry for the Islamic State group as the prophesied scene of an end-of-days battle. Dabiq holds crucial ideological importance for ISIS because of a Sunni prophecy that states it will be the site of an end-of-times battle between Christian forces and Muslims. AFP

BEIRUT, Lebanon — Syrian rebels dealt a major symbolic blow to the Islamic State of Iraq and Syria (ISIS) group on Sunday by capturing the town of Dabiq where the jihadists had promised an apocalyptic battle.

The defeat for ISIS came as the United States and Britain warned they were considering imposing sanctions against economic targets in Syria and Russia, which is a key ally of Syrian President Bashar al-Assad, over the government-imposed siege of second city Aleppo.

The town, in Syria’s northern province of Aleppo, is of little strategic value. But Dabiq holds crucial ideological importance for ISIS and its followers because of a Sunni prophecy that states it will be the site of an end-of-times battle between Christian forces and Muslims.

The Fastaqim Union, an Ankara-backed rebel faction involved in the battle, said Dabiq had fallen “after fierce clashes”.

Rebel commander Haitham Ibrahim Afassi told AFP: “I thank God for giving us victory. The heros of the Free Syrian Army have liberated the region.”

Video footage showed the streets of the town virtually deserted, with black ISIS flags painted on the facades of buildings as well as jihadist graffiti.

Video footage showed the streets of the town virtually deserted, with black ISIS flags painted on the facades of buildings as well as jihadist graffiti.

Dabiq has become a byword among ISIS supporters for a struggle against the West, with Washington and its allies who are bombing the jihadists portrayed as modern-day Crusaders.

ISIS, which seized control of large parts of Syria and Iraq in mid-2014 and declared an Islamic “caliphate”, has been dealt a series of military defeats this year and is bracing for an assault on its key Iraqi stronghold Mosul.

Turkey launched an unprecedented operation inside Syria on August 24, helping Syrian rebels to rid its frontier of ISIS jihadists and Syrian Kurdish militia.

Clashes took place in Aleppo’s northern and southern outskirts on Sunday, as well as in the city center, the Observatory said.

An AFP correspondent said two buildings had been destroyed and reported nearly non-stop air raids on the opposition-held half of the city since midnight.

US Secretary of State John Kerry, in London Sunday for talks on Syria with his British and French counterparts, branded the bombardment of civilians in Aleppo “crimes against humanity”.

“There are a lot of measures that we’re proposing including extra measures on the regime and their supporters,” Johnson said.

“These things will eventually come to bite the perpetrators of these crimes, and they should think about it now,” he warned.

‘No appetite for war’

Fighting has surged in the city following the collapse last month of a ceasefire brokered by the United States and Russia, raising deep international concern.

Kerry was in London to brief Washington’s European allies after “brainstorming” talks in Lausanne with the main players in Syria’s conflict, but hopes for a breakthrough in the conflict that has killed more than 300,000 people since 2011 remained dim.

Saturday’s meeting in Lausanne did not produce a concrete plan to restore the truce that collapsed amid bitter recriminations between Washington and Moscow.

Kerry warned Sunday that US President Barack Obama had not taken any option off the table in trying to stop the killing, but downplayed the possibility of increased military action in Syria.

“We are discussing every mechanism available to us but I haven’t seen a big appetite from anyone in Europe to go to war,” he said. CBB