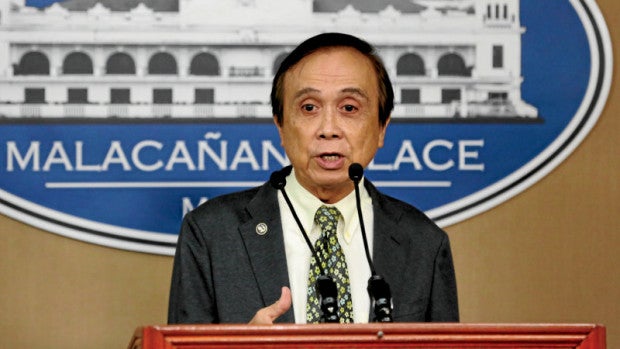 The country’s chief economist told a Senate committee he would  explain to President Duterte that the historic Paris Agreement on climate change would not hinder Philippine economic development.

“I am in favor of ratifying it,” Socioeconomic Planning Secretary Ernesto M. Pernia told Senate finance committee chair Sen. Loren Legarda in a hearing last week on the proposed 2017 budget of the National Economic and Development Authority (Neda).

President Duterte had earlier declared he was against ratifying the Paris Agreement that call on member countries to reduce their greenhouse gas emissions by as much as 70 percent.

According to Pernia, the President believes this is going to prevent the country from building more [manufacturing] plants… that it would stifle industrialization. “But it’s a matter of informing him and illustrating the importance of the agreement,”  Pernia said.

Pernia on Thursday committed to submit to the Climate Change Commission (CCC) Neda’s certificate of concurrence in the Paris Agreement within that day.

Legarda, who represented the Philippines at the initial climate sessions in Paris, gave the CCC until Oct. 20 to secure certificates of concurrence from 24 other agencies.

Former President Benigno Aquino III himself took part in the 21st Conference of Parties in Paris late last year, a global effort at fighting climate change by forging a legally binding agreement aimed at mitigating the effects of climate change, particularly the rise in global temperatures.

But as of last week, only seven government agencies had submitted their respective certificates of concurrence: the departments of education, health, local government, national defense, social welfare; the Metropolitan Manila Development Authority and the National Security Council.

Legarda believes that upon securing all the agencies’ certificates of concurrence, the Office of the President would have to be ultimately convinced.

The senator reiterated that the climate agreement would not hamper industrialization or economic development, pointing out that the Philippines would not be forced to commit to a 70-percent reduction in greenhouse gas emissions until 2030.

“I understand it’s not inked in the agreement. But there’s no line in the climate agreement that the Philippines must reduce emissions. It just says we must have contributions,” Legarda said.

She said contributions to emission reduction may differ per country depending on  the financial or technical assistance that industrialized nations can give to a country.

“Nowhere in the agreement does it say the Philippines is not allowed to develop, manufacture, industrialize—that it will hamper our development. It is not just a mitigation agreement—it is a mitigation and adaptation agreement. There are common but differentiated responsibilities,” Legarda said.

At the hearing, representatives of the CCC noted that developed countries that accounted for the majority of historical emissions will have the greater burden of reduction.

As such, Legarda noted that President Duterte was “citing climate justice, that industrial nations must be responsible.”

“But ratifying the agreement does not mean it will stymie our development,” she said.

The CCC pointed out that the agreement allows developing countries to continue economic development in the context of sustainable development and poverty eradication.

“It will not hamper industrialization and it may even invite more foreign investors,” the CCC officials said.

Legarda told Pernia: “It’s very clear, someone just has to explain it to the President in manageable and simple terms that nowhere in the agreement did we even put 70-percent [emissions] reduction. It’s just a contribution—our reduction is even pegged on technical and financial assistance, so how can we lose?”

Pernia responded: “I don’t think there will be a problem with reduction [in emissions]. We shall try to relay to the President the correct interpretation.”

Legarda stood pat on her support for the agreement, saying “there must be someone to convince me that it’s bad; only then will I change my mind.”

“But no one has told me that it’s bad for us, so I’m convinced,” she said.

But in the end, it will still be the President’s call if the Philippines would be a signatory to the Paris Agreement, Legarda said.

“If the President doesn’t really want it, we don’t force it,” she added.