56 of mountaineers stranded in Mariveles amid typhoon rescued 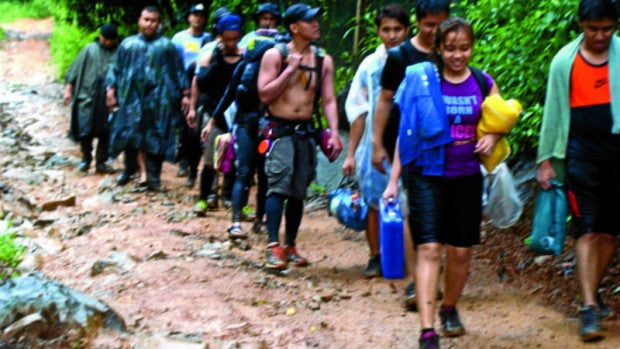 DOWN TO SAFETY Mountaineers descend to safety along the slippery trail from the ridge of Mount Tarak in Mariveles, Bataan. —GREG REFRACCION

CITY OF SAN FERNANDO, PAMPANGA—Rescue workers on Sunday escorted to safety 56 of 120 mountaineers who were stranded on Mount Tarak in Mariveles town in neighboring Bataan province in stormy weather.

Thirty other trekkers were on their way down as of 11 a.m., according to Supt. Crizalde Conde, Mariveles police chief. The mountaineers, mostly from Manila and Cavite province, began the trek on Saturday, he said.

“The mountaineers were advised to descend immediately. There are still 30 of them left in the mountain but are now headed down,” Conde told the Inquirer in a telephone interview.

He said rescue teams, including some 50 policemen and army soldiers, were on the ground to meet the mountaineers.

In Aurora province, eight mountaineers have established communication from Mount Ninga in Dingalan town’s Davil-davilan village, after they were reported missing on Oct. 14, according to Elson Egargue of the disaster risk reduction and management council.

The mountaineers contacted the village chief at 10:30 p.m on Oct. 15., and were with a resident, Roger Villa, Egargue said. —TONETTE OREJAS AND VINCENT CABREZA

Mount Tarak, which is a combination of “tabak” (hunting knife) and “tarik” (steep), is located in Barangay Alas-asin in Mariveles, Bataan province. Its adjacent volcanic edifices are Mt. Mariveles, Mt. Pantingan, Mt. Bataan and Mt. Vintana.

Five to seven hours of trekking through the rough terrain and steep cliffs would bring mountaineers to the Tarak Ridge, which is some 1,130 meters (3,700 ft.) above sea level. A panoramic view of Bataan and Manila Bay is seen from the summit.

An ideal site for exploration, Tarak has thick forests, waterfalls and rivers, such as Paniquian and Papaya.  SOURCES: INQUIRER ARCHIVES, BATAAN.GOV.PH, PHIVOLCS.GOV.PH