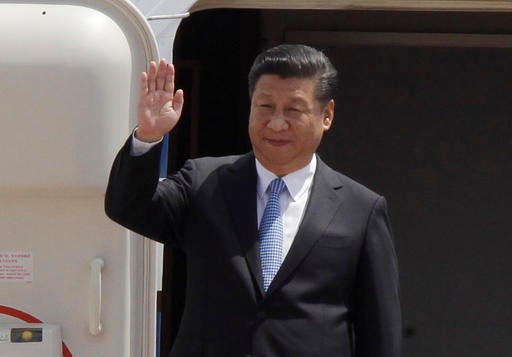 Chinese President Xi Jinping waves from a plane on his arrival at Phnom Penh International Airport in Phnom Penh, Cambodia, Thursday, Oct. 13, 2016. Xi is on a state visit to strengthen the relationships between the two countries and to witness the agreements to be signed. AP Photo

PHNOM PENH, Cambodia— Chinese President Xi Jinping on Thursday began a two-day state visit to strong ally Cambodia, during which he will strengthen the already firm relationship and witness the signing of nearly 30 agreements.

It is Xi’s first trip to the impoverished Southeast Asian nation since he became head of state. He is due to meet with King Norodom Sihamoni and Prime Minister Hun Sen.

Hun Sen said that at least 28 cooperative agreements, mainly covering the economy, investments, agriculture and infrastructure, are set to be signed during Xi’s visit.

China is Cambodia’s key ally and economic partner, providing millions of dollars in aid and investment over the past decade. China has granted Cambodia tariff-free status on hundreds of trade items and written off its debt. In July, Beijing gave nearly $600 million in aid to support the country’s election infrastructure, education and health.

In return, Cambodia supports China in international forums, including in Beijing’s ongoing dispute with other Southeast Asian countries in the South China Sea.

Security was tight for Xi’s arrival at Phnom Penh International Airport, where several hundred students stood at both sides of the road to greet the president and his delegation by waving Xi’s portraits and the two nations’ flags. Several thousand security personnel also have been deployed along the streets in the capital.

Xi signed an article in the largest Cambodian daily Rasmei Kampuchea in which he said that the two countries “enjoy deep political trust and win-win economic cooperation.”

“China and Cambodia are devoted friends. On issues concerning each other’s core interests and major concerns, our two countries have stood together and supported each other,” he wrote.