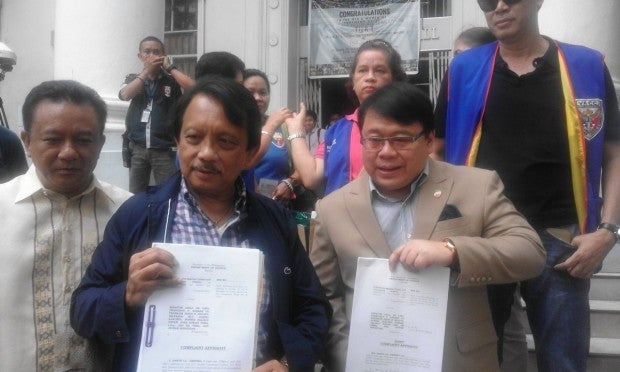 A day after the conclusion of the House probe on drug proliferation in the New Bilibid Prison (NBP), an illegal drugs case was filed against Sen. Leila De Lima and several others on Tuesday before the Department of Justice (DOJ).

The drug charges over violation of section 5 in relation to section 26 (b) of R.A. 9165 the Dangerous Drugs Act of 2002 were filed by the Volunteers Against Crime and Corruption (VACC), led by its founding chairman and incumbent president Dante Jimenez.

The 65-page complaint affidavit cited the testimonies of witnesses during the congressional inquiry into the NBP drug trade, which tagged De Lima as alleged recipient of millions in drug money supposedly used for her senatorial campaign.

Citing probable cause, the VACC accused De Lima and others of “conspiring and confederating with one another, engaged in the sale and trade of illegal drugs inside and outside the Bilibid.”

READ: Sebastian: De Lima was my protector in Bilibid drug trade | De Lima says Sebastian pressured by people out to destroy her

“Sen. de Lima, utilized her power and authority as then Secretary of Justice (SOJ), to abet and even promote the proliferation of massive drug trade inside the Bilibid.  This could not have been made possible without the support of other corrupt public officials of the DOJ, Baraan III and Bucayu, her driver bodyguard Dayan, another security personnel Sanchez, Sec. de Lima’s nephew Jad, and well-known drug lord Jaybee Sebastian,” the complaint read.

“An accepted badge of conspiracy is when the accused by their acts aimed at the same object, one performing one part and another performing another so as to complete it with a view to the attainment of the same object, and their acts though apparently independent were in fact concerted and cooperative, indicating closeness of personal association, concerted action and concurrence of sentiments,” it added.

The complainants said De Lima “had every motive to engage in illegal drug trade.”

“Why would Sen. de Lima allow all these iniquitous dealings to propagate inside the NBP? The motive is there for everyone to see.  As early as prior to the 2013 mid-term elections, she had the ambition to become a senator,” VACC said.

“With all the damning evidence before us, can we safely say that the monster – narco-politics has indeed devoured all the respondents including then Secretary now Senator of the Republic of the Philippines Leila de Lima herself?” it added.