De Lima says Sebastian pressured by people out to destroy her 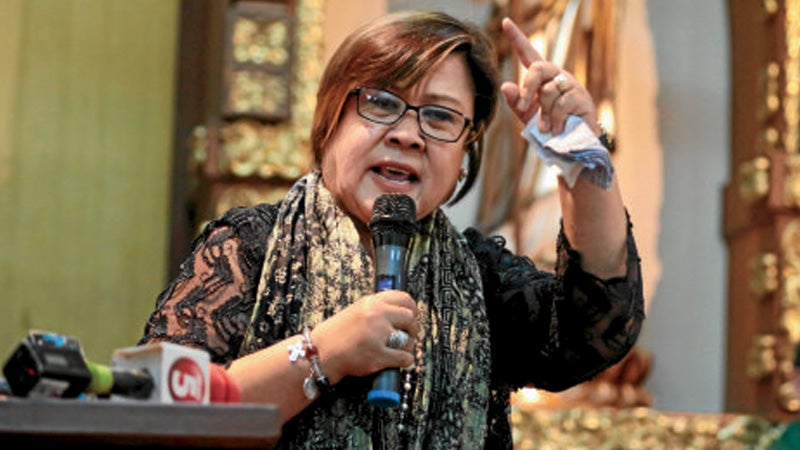 Senator Leila de Lima speaks at a mass for Option for Life at the CBCP Chapel in Manila on Monday, October 10, 2016 in celebration of the World Day Against Death Penalty. GRIG C. MONTEGRANDE/Philippine Daily Inquirer

Sen. Leila de Lima said Jaybee Sebastian was apparently “pushed to the wall” by people out to destroy her after the convicted kidnapper and car thief testified on Monday that he had given her personally P2 million for her senatorial campaign in the May elections.

“Apparently and obviously, he was unable to take the pressure,” De Lima said of Sebastian’s testimony at the resumption of the House hearing on illegal drug activities at New Bilibid Prison (NBP).

She told reporters she had previously revealed sources telling her that Sebastian and other high-profile NBP inmates were being forced to testify against her by allies of President Duterte in the House of Representatives’ inquiry, which she described as a “kangaroo court.”

“When I pray, I ask: Lord, do I deserve all this?” De Lima said, addressing a gathering celebrating the World Day Against the Death Penalty, after Mass at the Catholic Bishops’ Conference of the Philippines compound in Intramuros.

Wearing a black dress and her voice cracking, De Lima said, “I’ve devoted myself to public service. I never think about my personal or political interest because I am not a politician.”

During Mass, she was seen dabbing at her eyes with a handkerchief. She described herself as a strong woman “until recently, who was able to hide her emotions in public.”

“It’s only now that no matter how hard I try, my tears just fall because of what is happening,” she said, adding that she was mourning for the spate of killings under the Duterte administration’s war on illegal drugs and lies in the House inquiry.

She had said her farewell to her family. She said this was because she had been receiving death threats and hate messages.

Several convicts testified that they gave her drug payoffs through her bodyguard, Ronnie Dayan, when she was still justice secretary, an allegation that De Lima has repeatedly denied.

In Monday’s hearing, Sebastian said he gave the money to Joenel Sanchez, a member of De Lima’s security team, who had testified that Dayan was not only a driver and bodyguard but also her lover.

De Lima said a source told her that Sebastian was the real “target” of the brawl at NBP on Sept. 28. Sebastian and three other inmates were stabbed and wounded in that incident and another was killed.

“That can be the only explanation why he was not able to take the pressure. He has heeded his wife who had pleaded to him to follow whatever they told him to do because they were only after De Lima. De Lima will understand it later,” the senator quoted her source as saying of Sebastian.

De Lima denied convicted drug lord Peter Co’s accusation he gave her P10 million as drug payoff. She said Co, like Sebastian, was seriously wounded in the Sept. 28 incident and that was why she was not surprised Co made those allegations. 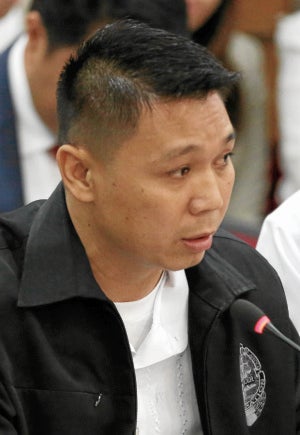 I’ve spent 19 years in government service. I never had a record. I don’t even have immunity

Told that Sebastian had denied he was a government “asset,” she said that former Bureau of Corrections chief Franklin Bucayu and two other officials had told her that Sebastian had supplied information on illegal drug activities at NBP.

On Sanchez receiving payoffs for her from Sebastian, De Lima said it was better for the congressmen to confront Sanchez about this. She said Sanchez was also pressured to tell lies against her.

She added that members of her staff were being harassed, pressured and coerced into testifying against her.

Sanchez on Monday denied allegations he was De Lima’s bagman and that he had ordered the inmates to raise drug money for the senator’s candidacy.

“I’ve spent 19 years in government service. I never had a record. I don’t even have immunity,” Sanchez said.

He brushed aside Sebastian’s claim that he was De Lima’s “sweetie-sweetie”—another lover, aside from Dayan, who received funds for her from NBP inmates.

Sebastian shot back: “It might be better to ask him if he really does not know Herbert Colanggo. That in itself was a huge lie.”

Sanchez maintained that he did not know Colanggo, but admitted knowing his manager, Reynante Diaz.

Antipolo City Rep. Romeo Acop noted that Sebastian’s statement that he delivered much of the P10 million he had allegedly collected for Sanchez from March to May 2015 debunked the aide’s claim that he took a leave of absence at the time.

Acop had to pit Sebastian and Sanchez’s words against each other, and the hearing soon devolved into exchanges of denials and assertions of who were telling the truth.

This prompted the committee chair, Mindoro Oriental Rep. Reynaldo Umali, to warn that whoever was lying would face consequences.

National Bureau of Investigation Deputy Director Vicente de Guzman III said Sanchez had passed a lie detector test conducted by the agency. Umali directed the NBI to submit its report to the panel. —WITH REPORTS FROM JULIE M. AURELIO AND VINCE F. NONATO