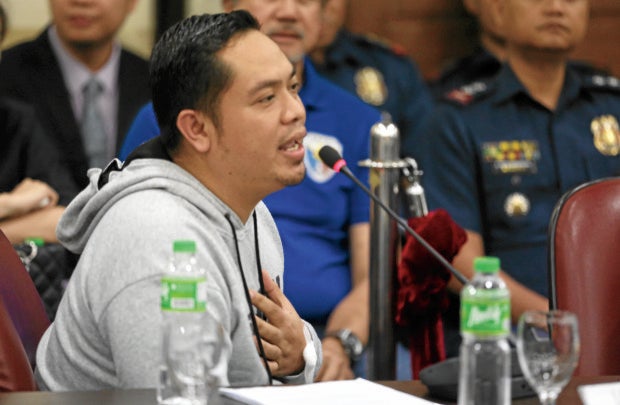 Convict Jaybee Sebastian on Monday claimed the attempt to kill him by a former police chief inspector, Clarence Dongail, who is serving kidnapping and murder sentences, was part of an effort to cover up activities of the “ninja cops” recycling and selling confiscated illegal drugs.

Testifying in a House hearing, Sebastian said Dongail wanted to silence him and other inmates for their knowledge of the illegal drug activities of rogue policemen outside the prison walls.

He said Dongail ordered local drug lords in Building 14 to purchase “shabu,” or crystal meth, from high-profile Chinese inmates so that he would know the location of their storage areas and relay the information to the ninja cops.

He said the stores of shabu confiscated from the warehouses of Chinese drug lords were divided among ninja cops and large parts of the haul were sold to users.

“This is the real reason why drugs proliferated in the Philippines,” he said in his affidavit in Filipino, which was read during the hearing.

Sebastian said the slain Tony Co and Peter Co, one of the three stabbing victims, learned about the activities of the ninja cops after a raid in a shabu warehouse in Meycauayan, Bulacan province, upon information supplied by Dongail.

“The clear reason why Tony Co was ordered killed and Peter Co and I were stabbed was our knowledge of the raid,” he said.