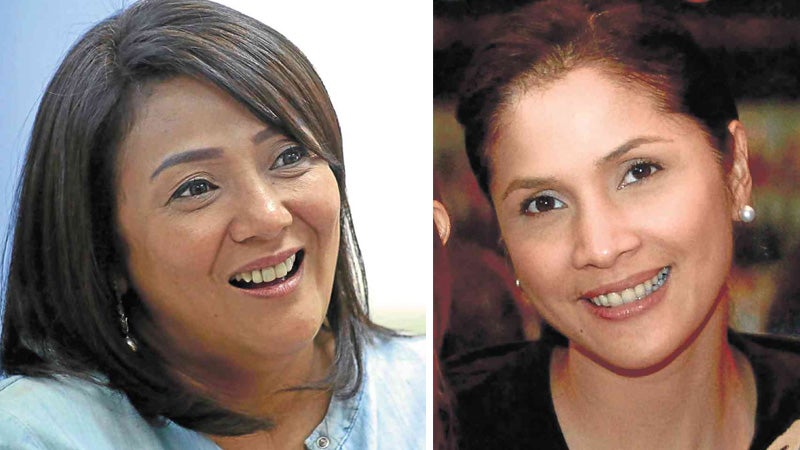 But at the same, the President’s spokesperson Ernesto Abella said that Isidro with her “beggar mentality” was exactly the kind of person Mr. Duterte had been targeting in his speeches.

“A colleague of mine, Agot Isidro, went viral because of her message, her opinion and her stand. I want to say that I’m one with her. We’re artists, we’re in arts and culture, but we have our own minds, conviction and principles,” Picache said after a Mass marking World Day Against Death Penalty.

At the same time, she reaffirmed her opposition to the death penalty and the ongoing spate of extrajudicial killings.

Picache was one of the attendees at the Mass celebrated at the Catholic Bishops Conference of the Philippines’ Intramuros chapel. Also present was embattled Sen. Leila de Lima, even as convict Jaybee Sebastian was testifying against her before the House of Representatives, and Human Rights Commissioner Karen Gomez Dumpit.

It may be recalled that Isidro took to Facebook on Friday to criticize Duterte for his expletive-laced tirade against the United States and international bodies over the issue of foreign aid.

She also branded the President a psychopath, telling him to have himself checked by a psychiatrist.

According to Picache, “I believe that execution or death is not the means to achieve justice. Violence and death are not the ways to end crimes. I’m here to express my disagreement over the extra-judicial killings.”

She noted that she was also a victim after her 75-year-old mother, Zenaida, was killed in September 2014 by their houseboy. Michael Flores was sentenced last year to reclusion perpetua after he was found guilty of robbery with homicide.

“I am also a victim of violence. My mother was killed two years ago by a drug addict. And just the same, I’m here to reaffirm my commitment against the death penalty,” Picache said.

She urged Filipinos to pray in these trying times, stressing that violence has no room in society.

“I am a mother. I want my child to grow up in a free, democratic society. So let us not let that die, let us continue praying because our country needs it now,” Picache added.

Presidential spokesperson Ernesto Abella, meanwhile, said that the public, including Isidro, should take the President’s rants against the United States as a challenge to be more nationalistic and not depend on other countries.

“Her position is the kind of mental attitude that the President wants to address, which is why he mentioned that we tend to have a mendicant or a beggar’s mentality,” Abella told reporters on Monday.

He said the President wanted Filipinos to “become independent, mentally, emotionally, internally, and be willing to risk a bit of sacrifice so that we can establish our own independence…”—WITH GIL CABACUNGAN